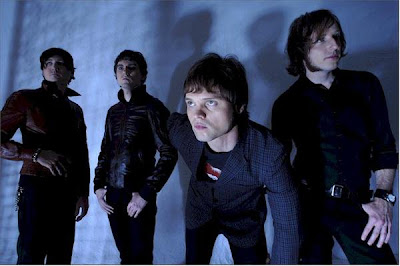 These guys know their way around A Christmas Carol. Photo from The Boss Martians Facebook page.

Here's Part Three of last year's dissertation on Little Steven Van Zandt's Christmas A Go Go, which is available on Wicked Cool Records. By the way, there's still time to cast your vote in the Underground Garage's Coolest Song In The World 2010 survey. Voters have to pick from a list of eligible tracks selected by Little Steven, but he offers several solid choices. You can also enter a contest to win a trip to the Hard Rock Hotel and Casino Punta Cana in The Dominican Republic.

The syndicated Little Steven's Underground Garage airs in Chicago every Sunday night from 9 to 11PM on WXRT, 93.1 FM. Speaking of WXRT, the station takes pride in its vast, eclectic, if not always reverent treasury of holiday songs. On Monday, December 13th, WXRT kicks off its 12 Nights of Christmas programming, which will feature radio personality Tom Marker playing rock and roll Christmas tunes from 8PM to midnight Monday through Friday, and 7PM to 11PM on Saturdays. The special holiday program runs through Christmas night.

And now on to Christmas A Go Go Part Three:

As stated earlier, Little Steven Van Zandt was determined to increase the allure of this compilation by throwing in some genuine rarities. It’s safe to say there aren’t too many other holiday CDs that can give you a surf rock reinvention of “Santa Claus Is Coming To Town” delivered by 1950s kids show host, Soupy Sales. Listening to “Santa Claus Is Surfin’ To Town,” you can almost hear Little Steven chuckling like he does when he laughs at his own jokes on his radio show, Underground Garage. The clever lyrics come in waves of surfer lingo, as Sales describes Santa hanging 10 and delivering toys on his board. People who don’t live near the water can expect to see him making his rounds in his woody.

Christmas songs from time to time have depicted women with romantic designs on Santa, and that’s what the five ladies in the Swedish band, The Cocktail Slippers have in mind on “Santa’s Coming Home.” This catchy number laments the amount of time Santa’s work keeps him away, and it's presented via a Go-Go’s style arrangement with some fun vocal interplay.

Actor Joe Pesci has made quite an impression through his films, particularly the “funny how?” scene in Goodfellas. On Christmas A Go Go, he gives the wiseguy treatment to the innocent Gene Autry song, “If It Doesn’t Snow On Christmas.” Backed by a big band and spouting 1940s style patter like, “I would really feel much better if the mooch could fly a plane,” Pesci makes this sound like it could have been recorded around the same time as Autry’s version. He has issues with a distinctively New Joisey sounding children’s choir and derides them as “reform school brats” when he discovers someone has stolen all the candy canes.