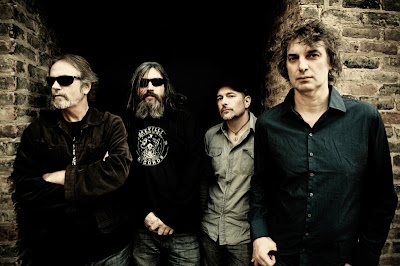 CORRECTION: When I stated in last week’s Slumgullion that The Handcuffs would be opening for Cliff Johnson and The Happy Jacks at The Abbey Pub on January 1st, I’m pretty sure it was because I saw it listed that way in one of Chicago’s daily newspapers. Turns out that information is wrong. Thin Grin, which is comprised of members of the power pop group Green and The Slamming Watusis, (an offshoot of the punk band Bohemia), actually is the opening act. I apologize to all concerned.

Australian rockers The Church, whose shimmering hits “Under The Milky Way” and “Reptile” graced FM airwaves in the 1980s, will be performing the entire albums Untitled #23, Priest Aura, and Starfish when they come back to the States for the “Future Past Perfect” Tour. The band has dates scheduled in February for Los Angeles, San Francisco, Seattle, Chicago, Philadelphia, and New York, and will be reissuing its back catalog on Second Motion Records.

The Britanicas have been in the holiday spirit lately. The power pop trio is offering a free mp3 of its version of “What Child Is This” on drummer-vocalist Joe Algeri’s freewheeling audio page. An acoustic take on “Last Christmas” that was very recently recorded by Algeri and bassist Herb Eimerman will get its premiere on Adam Waltemire’s Pop Garden Radio Show tomorrow night (December 18th) at 8PM Eastern Time on AM 1300 WMEL, as well as online.

Singer-songwriter Ellen Rosner and her new band The Bubbly Creek All Stars will be one of the performers on the bill at the Like A Hole In The Head benefit this coming Monday night (December 20th) at Martyrs on Lincoln Avenue. Proceeds will go to help Richard Lynch, who recently underwent surgery for a brain tumor, pay his medical bills. Other acts participating include Suzy Brack & The New Jack Lords, Lou Carlozo, and Ripley Caine, as well as a special one-night only reunion of Ulele. The benefit begins at 6:30PM.

Another stocking stuffer this year could be Chicago photographer Linda Matlow’s newly revised edition of her Hardcover book. It’s a 48-page retrospective that includes photos of various rock musicians on and off stage dating back to 1979. Hardcover is available for $65 from Matlow’s website.

Rolling Stone reports that a rare tape of Pink Floyd performing in concert in 1967 has been found in Sweden. This was back when Syd Barrett was a member. Writer Jem Aswad reports that it will be broadcast next May at the Golden Circle club in Stockholm.

Bon Mots, the melodic power pop band that includes Eric Chial of Penthouse Sweets, is playing at the Double Door tomorrow, December 18th, along with The Damnwells and The Darlings.

Corky Siegel and Megon McDonough will perform together at a Cocktail Christmas Party this Sunday, December 19th at the Metropolis Performing Arts Centre in Arlington Heights. The performance, which will be rendered in a cabaret setting, starts at 7:30PM.

Veteran Chicago power pop band The Webstirs will be part of a multi-act showcase at The Beat Kitchen on January 22nd. Other acts include The Noses (billed as a Love Kit reunion) Wally Dogger, This Magazine Is Haunted, and Cotton Pony.

The 2011 Rock And Roll Hall Of Fame Inductees have been announced, and my choice, Donovan, did not make the cut. Still, the induction of the critically-acclaimed but defiantly non-commercial Dr. John and Tom Waits helps deflect the long-standing complaint that The Hall only honors best-selling artists.

Aliotta, Haynes & Jeremiah have recorded a Christmas version of their timeless FM radio hit “Lake Shore Drive” that’s available on their website. The trio also has a deal going where fans can get a customized version of the original “Lake Shore Drive” with their name inserted. I have a vague memory of Aliotta, Haynes & Jeremiah doing something similar with radio station call letters back in the day. But that was a long time ago, dearie.