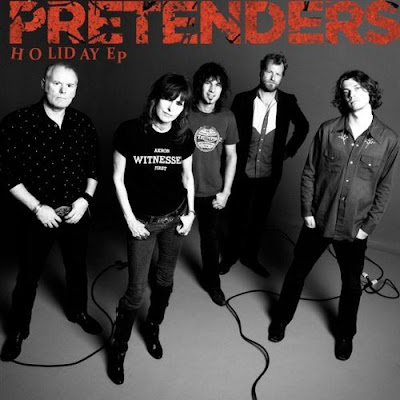 Merry Christmas! Here's a random sampling from last year of some of the better Christmas songs around.

“Come Around” - Mindy Smith I first learned of this song in a column by then Sun-Times rock critic Jim DeRogatis, who said it sounded like The Bangles. That’s all it took to reel me in. Appearing on Smith’s 2007 My Holiday CD, it offers ringing guitars and layered vocals in a catchy song that calls children, women, and men to celebrate Christmas by worshiping together.

“George Bailey” - Carolyn Sills It’s interesting to find how many current holiday songs mention It’s A Wonderful Life. Brooklyn-based singer-bass player Carolyn Sills goes them all one better by devoting an entire song to Frank Capra’s classic flick and its put-upon hero. Set to an inviting arrangement that mixes twangy Country & Western music with a bit of the 1960s girl group sound, “George Bailey” merrily whisks us off to Bedford Falls. Sills notes that the character won her over as a kid, and she makes references to the grubby little town he tried so desperately to escape, as well as some of its better known citizens, like Mr. Gower. “George Bailey, I’ll love you ‘til the day I die,” she sings on the chorus, echoing the words of Mary Hatch. “Every Christmas Eve, you make me cry.” The song is available on iTunes, and there’s also a very clever video for it on YouTube that uses vintage Betty Boop style animation.

can now also be found on The Pretenders' Holiday EP, along with “Blue Christmas” “I Saw Mommy Kising Santa Claus.”

“What’s This?” - Soundtrack of Nightmare Before Christmas A musical sleigh ride of quick rhymes and clever imagery, the fully orchestrated “What’s This?” follows Jack Skellington through Christmas Town as he discovers a holiday that’s completely foreign to him. Jack, of course, is more accustomed to the gross and ghoulish trappings of his domain, Halloween. “What’s this?” he continually asks in amazement as he encounters snow, caroling, gifts and elves for the first time. “There are children throwing snowballs here/Instead of throwing heads/They’re busy building toys/And absolutely no one’s dead.” This song is one of the better parts of a thoroughly enjoyable movie.

“Winter Wonderland” - Hello Dave The 1994 CD A Hello Dave Christmas With Friends aimed to raise funds to help children afflicted with or affected by HIV/AIDS. Imagine your car breaking down on a deserted country road while you’re driving to some party on Christmas Eve. You walk to the nearest open venue, which happens to be a rustic bar. Hello Dave is onstage and has the local townsfolk up and dancing to its Country & Western versions of “Have Yourself A Merry Little Christmas,” “Silent Night,” and other classics. “Winter Wonderland” rocks to the loping bass lines played by Willis Potocki and some spirited harmonies from vocalist-guitarist Mike Himebaugh and vocalist Paul Bolger. You call for a tow truck, but while you wait for its arrival, you’re having a great time.

“We Wish You A Merry Christmas” - The Daugherty McPartland Group Several years back, a friend and I dropped by a couple we knew for a holiday visit a few days before Christmas. It was a Sunday night, and they had the WXRT show Jazz Transfusion playing on the radio. Maybe I was just in a festive mood, but those spirited jazz versions of holiday songs really made an impression on me. Acoustic Christmas, released by The Daugherty McPartland Group in 1996, has that same easy going vibe. Tim Daugherty’s fluid piano playing takes center stage throughout the CD, but Dennis McPartland on percussion, Bob Thompson on saxes and flutes, and Jim Munro on bass are also impressive. People who enjoyed Vince Guaraldi’s score for A Charlie Brown Christmas will find a lot to like here, and in fact, “Christmas Time Is Here” is included on Acoustic Christmas. “We Wish You A Merry Christmas” is both classy and fun, and like all of Acoustic Christmas, the perfect soundtrack for a friendly, holiday get-together.

“Double-0-Santa” - Seks Bomba The 2002 holiday compilation 50,000,000 Elves Fans Can’t Be Wrong lives up to its title with a variety of fun tracks, and “Double-0-Santa” by the Boston based band Seks Bomba is one the best. This lounge tune mixes the concepts of a Secret Santa and a secret agent, with humorous results. “Mistakes are bad for business, says the man called Father Christmas, AKA Double-0-Santa,” vocalist-guitarist Chris Cote reveals over a slinky guitar and keyboards arrangement. Santa isn’t too cool to accept snacks, but it should be understood that he likes his “egg nog stirred, never shaken.”

“Thanks For Christmas” - XTC Few bands can match the Brit trio XTC when it comes to crafting songs with clever lyrics and indelible melodies. “Thanks For Christmas” stands out on New Wave Xmas, a Rhino various artists compilation that also includes “2000 Miles” by The Pretenders and “Christmas Day” by Squeeze. Introduced with some triumphant horn playing, the catchy “Thanks For Christmas” finds XTC using gorgeous harmonies while creating scenes like Santa’s reindeer resting after a hard-working Christmas Eve, and ecstatic kids decorating trees. “It’s such a shame it’s only once a year,” the song notes. “Three hundred and sixty-four days full of doubt and fear/You’ve been saving your love up/Let it out/‘Cause Christmas is here.”