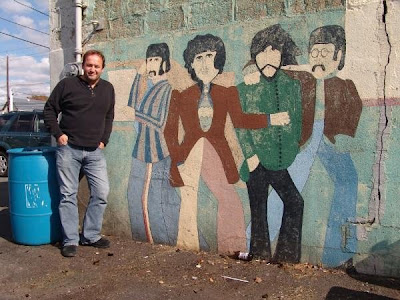 Jim Babjak likes Christmas and The Beatles. Photo from The Smithereens Official Website.

Merry Christmas to all who visit this site. Here's another repost from 2009.

In addition to being subtitled “a HOSPICE awareness and benefit project,” Ho Ho Ho Spice is described on the front cover as being “an ECLECTIC and FRIENDLY Alternative-ish Christmas Compilation.” I have to admit that even after owning this double CD for five years, I’m completely unfamiliar with some of its 40-plus tracks. In a way, artists contributing to holiday charity CDs are like people giving presents. They mean well, but in the end, they don’t always offer something that’s in my style. Which doesn’t mean the songs are bad. The extensive scope of Ho Ho Ho Spice means there’s something for everyone here.

It’s hard to explain why I like Kelsey Jean’s “Let’s Look Under The Christmas Tree.” After all, it’s a mainstream Country & Western tune from the perspective of a tween girl whose most fervent wish is for “A Kenny Chesney poster just for me.” The only hint of anything less than wholesome is her playful laugh at the end of the lines, “Always on his list for nice, never naughty - - - maybe once or twice.” But Kelsey Jean’s catchy song captures the youthful excitement of believing that any number of wonderful things might happen come Christmas morning.

That’s the spirit Leanne Weiss, another C&W artist, wants to relive on her toe-tapping number, “Christmas Aint Just For Kids Anymore.” Weiss recalls the fun things she did as a child, like going on sleigh rides and putting cookies out for Santa, and decides there’s no reason not to start doing them again. Her appealing vocals as well as the peppy piano arrangement help sell that sentiment.

For a completely different perspective, Ho Ho Ho Spice gives us the rowdy “That Punchbowl Full Of Joy” by Sonny Columbus & His Del Fuegos. The very same Boston-based Del Fuegos with Dan Zane that Julianna Hatfield sang about on “My Sister.” The song, which was originally offered on a rare 12” EP collection called A Boston Rock Christmas, starts off with a spaghetti western intro before segueing into a slinky rock-a-billy romp with more double entendres than Santa has elves.

Jim Babjak, lead guitarist-vocalist for The Smithereens, offers another original Christmas tune (his “Waking Up On Christmas Morning” appears on Hi-Fi Christmas as well as Christmas With The Smithereens) with the mid-1960s flavored “It’s Love On Christmas Day.” With an arrangement that shows once again how much The Smithereens have been influenced by The Who, it declares that the true meaning of the holiday can’t be bought or sold.

The Butties rework the traditional hymn “Joy To The World” by combining it with “Please Please Me” by The Beatles. That’s the same idea The Fab Four Beatles tribute band had on its Hark! CD, although the vocal arrangement here is noticeably different. The Butties have a full-length CD of Beatles style Christmas songs, called 12 Greatest Carols.

As stated earlier, there are other gifts worth unwrapping on Ho Ho Ho Spice, like “Soul Christmas” from Graham Parker and Nona Hendryx, or Abney Park’s space age rendition of “The Dance Of The Sugar Plum Fairies,” but I’ll leave that to others. In 2006, Holiday Heart: An Eclectic, An Aural Celebration of Christmas and Chanukah, The Sequel to Ho Ho Ho Spice was released.