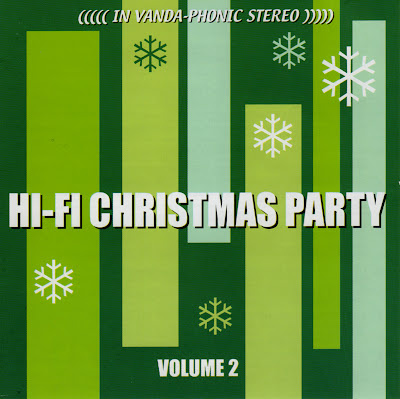 Following yesterday's repost of my 2009 review of Hi-Fi Christmas Party, here's a repost of Hi-Fi Christmas Party Vol. 2. Incidentally, Dan Pavelich, the musician behind this series, has just recorded two new Christmas songs under the moniker The Click Beetles. “Wonderful Christmas,” a mid-tempo, Smithereens-like celebration of love during the holidays, and the more dreamy “Hoofprints In The Snow” are available for free download at www.theclickbeetles.com/music.html

The concept behind the initial Hi-Fi Christmas Party, a various artists compilation, was to raise money to help fund research on the rare blood disorder, Von Willebrand’s Disease. According to producer/organizer Dan Pavelich’s liner notes on Volume 2, the success of that first CD inspired a sequel. Once again, the focus is on original1960s-style power pop, with a few exceptions.

The Elvis Brothers take us back a little further on their “Rock-A-Billy Christmas;” to the days of Buddy Holly. Composed by Graham Elvis, this peppy number showcases his bass playing, as well as the band’s playful, give and take vocals. The only disappointment, is that at just under two minutes, the fun doesn’t last long enough. The harmonies and big production values on Lisa Mychols & Wondermints’ “Lost Winter’s Dream” are reminiscent of Leslie Gore’s Top 40 hits; and Husky Team, which includes Smithereens drummer Dennis Diken, delightfully mashes “Auld Lang Syne” with “Green Onions.”

One of the few songs on Hi-Fi Christmas Party Volume Two that isn’t an original, or in a power pop vein comes from The Brothers Figaro Orchestra. Their unusual take on the traditional “God Rest Ye Merry Gentlemen” creates the ambience of a Big Band era radio show.