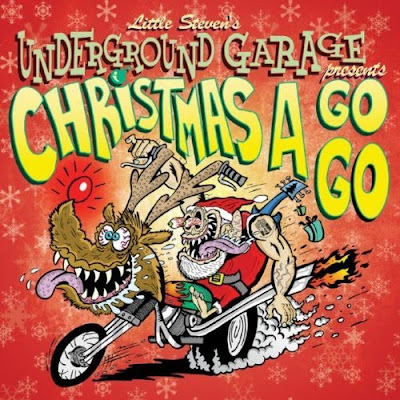 Another repost from last year for the holidays.

Bob Seger And The Last Heard’s funky “Sock It To Me Santa” is another treasure from the vault. Sounding like fellow Detroit native Mitch Ryder, Seger taps into vintage Motown as he barks out a litany of requests for toys. He proclaims in a spoken word intro that Santa’s got a brand new bag, and as the tune rolls along to a bottom heavy backbeat, it’s easy to imagine Santa wearing a long cape and looking a lot like James Brown.

The Ramones bring their instantly identifiable revved-up sound to “Merry Christmas (I Don’t Want To Fight Tonight)” as Joey Ramone plays the role of a guy pining for a holiday truce with his girlfriend. “Christmas aint the time for breaking each other’s hearts,” he notes.

I’m guessing that “All Alone On Christmas,” which features vocalist Darlene Love being backed by The E Street Band, has to be one of Little Steven’s favorite tracks on the CD. And not just because he wrote it and plays guitar on it. Love, of course, was part of the roster of stars on the Phil Spector produced A Christmas Gift For You, which many consider to be the best rock and roll Christmas album ever recorded. With Clarence Clemons blasting away on his sax, and just about everybody else in the band singing along, “All Alone On Christmas” beautifully melds modern rock and the 1960s.

Ringing guitars and great harmonies help current Brit rockers The Len Price 3 hark back to the original British Invasion on “It’s Christmas Time Ebenezer.” When I wrote my earlier post on Carl Wayne, I mentioned that The Hollies never recorded a Christmas song, but this melodic spin on the Dickens classic makes it sound like they did.