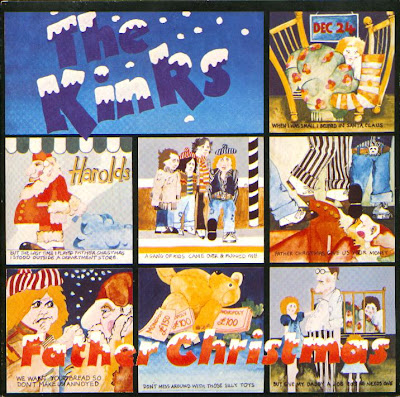 But first, a word about a Big Star tribute. Not the big star that was seen in the east, but the highly influential power pop band formed by Alex Chilton, Chris Bell, Jody Stephens, and Andy Hummel. Chicago musicians Steve Frisbie of Frisbie, John San Juan, Tom Szidon of The Joy Poppers, and Mike Zelenko, who currently drums with The Ladies & Gentlemen and was a member of Material Issue, are coming together for You Get What You Deserve: A Tribute To Big Star. It takes place at Schubas this coming Wednesday, December 15th, from 8:00PM to 11:00PM. The band Village will open, and DJ Poseur will also be on hand. Admission is $8 in advance, $10 at the door.

And now on to Christmas A Go-Go:

Singer Rufus Thomas is probably best remembered for his 1963 hit “Walking The Dog,” as well as an earlier duet with his daughter Carla, but he was also an R&B pioneer who first started recording in the late 1940s. The funky “I’ll Be Your Santa” is aimed at women instead of kids, and Thomas has his own concept of what bringing holiday joy entails. The bass guitar is the most prominent instrument in an arrangement that recalls Sly & The Family Stone, while Thomas’s vocals are both ribald and soulful.

Aussie garage rockers The Chevelles unleash a spirited take on a treasured hymn with the mostly instrumental “Come All Ye Faithful Surfer Girls.” This is a fuzz guitar festival with the only vocals being a Beach Boys like “Oooh, oooh, oooh.” A very catchy and fun tune.

The Electric Prunes’ psychedelic and slightly unsettling version of “Jingle Bells” has a spoken word intro that includes a special holiday greeting for Underground Garage listeners. The band then slinks into a slowed-down, heavy guitar arrangement, with vocals that sound like they’re coming from a chorus of over-served elves. All very odd, but somehow it all works.

Ray Davies of The Kinks has always been a master of satire, and on “Father Christmas,” he leads the band through a funny tale of a retail store Santa being pummeled by destitute children. Set in Britain’s economically troubled 1970s, the wry lyrics describe the kids screaming, “Don’t give my sister a cuddly toy/We don’t want a jigsaw or monopoly money/We only want the real McCoy.” One kid wants a job for his father so the family will have food to eat. Although Davies clearly meant the song to be funny, he sneaks in a charitable message that’s in tune with the season. “Have yourself a merry merry Christmas/Have yourself a good time/But remember the kids who got nothin’/While you’re drinking down your wine.”