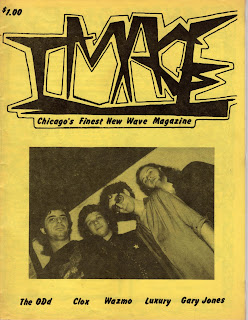 The latest entry in an ongoing series devoted to magazines of the past. Here’s a publication I won’t be putting up for sale at my Rock & Roll Garage Sale this weekend.

Billed as “Chicago’s Finest New Wave Magazine,” Image certainly had some impressive credentials. Ric Menck, who was a founding member of The Reverbs and would later go on to Velvet Crush and several solo projects, served as the Editor/Publisher, and the contributors included Cary Baker, Rachael Cain, and Moira McCormick. Linda Matlow, who took the cover photo of The ODd for this particular issue, headed the photographers staff. Oddly enough, or ODdly enough if you prefer, there’s no date on this issue, but if Menck was reviewing Bohemia’s Automatic Mind/Unconventional Boy/American Life EP as a current release, that would make the year 1980.

Menck’s extensive feature on The ODd revealed that lead singer-guitarist Hugh Hart was tired of being compared to Elvis Costello, and Clox lead vocalist-guitarist Terry Fox requested that McCormick describe his group as “a modern-dance-rock band” rather than as “new wave.” Baker used his I Dig The Nightlife column to provide a rundown on what was happening at clubs like Oz, Gaspar’s, Rut’s, Neo, Lucky Number, O’Banion’s, Huey’s, and Biddy Mulligan’s. Dave Luhrssen reported on the Milwaukee music scene, and Cain, who fronted the band Screamin’ Rachael and Remote, filled readers in on what was going on at Space Place.

Claire Pieterek reviewed a Wazmo Nariz concert at Tut’s, and Menck covered a Clox performance at The Lake County Jam. Record reviews included the Hung Up On Pop EP from Loose Lips, Epicycle’s “Colleen,” The Meaty Buys’ “New Freedumb” (which was a parody of a feminine hygiene product commercial, if I remember correctly), “I Know Ah Girl” by Special Affects, and three simultaneously released singles by B.B. Spin. There was also a profile on the coed Gary Jones, as well as a review of its single “Science Fiction.”

Gary Jones was one of my favorite local bands at the time, and I was (and still am) particularly fond of “Underground,” the B-Side of the catchy “Friction.” Years later, I would see Gary Jones singer Toby Masters participating in a multi-media stage show that also included two former members of my Famous In The Future comedy group. Small world.

The only ad in the decidedly do-it-yourself Image was on the back cover, and it was for the Wax Trax record store on Lincoln Avenue.

Ancient history, good times. Would love to see more if you have it.