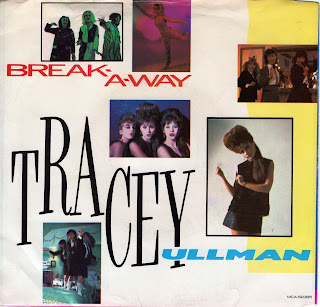 My review of The Like’s Release Me CD ran in the August issue of the Illinois Entertainer. While listening to the way that four-woman band from Los Angeles taps into the original British Invasion, I was reminded of how well comedienne Tracey Ullman captured the era on her cover of the Jackie De Shannon tune, “Breakaway.” The original was composed by De Shannon and Sheri Sheeley.

Starting off with three rapid blasts of guitar, Ullman’s version gallops along to a rock-a-billy beat, as she laments of desperately wanting to dump her ill-tempered boyfriend. “Even though you treat me bad./And many cruel words are spoken./You have got a spell on me./That just can’t be broken, no no.” Each verse presents another route of escape, followed by an admission that it can’t be followed. A retro masterpiece, “Breakaway” features Ullman absolutely nailing the 1960s sound.

In Ullman’s funny and well-crafted video for “Breakaway,” she and her back-up singers also perfectly capture the look and persona of early 1960s teenage girls, as they hang out in her bedroom, singing into hair brushes instead of microphones.

For an interesting comparison, watch Ullman’s “Breakaway” video, followed by The Like’s clip for “He’s Not A Boy.” The fun lives on.