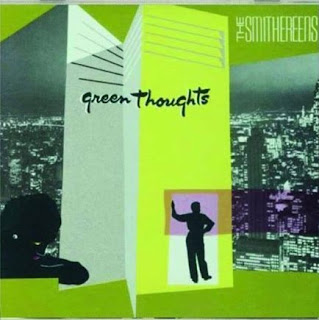 A regular feature where I present a review or article I wrote in the near or distant past. It takes its name from a line in a sketch Dave Drazin once wrote for the Famous In The Future comedy group. This time, it’s a review of the 1988 Green Thoughts LP by The Smithereens in honor of their coming to my home town of Palatine five days from now. The band played at least a few of the tracks from this release when I saw them at an outdoor gig right next to Wrigley Field about a year ago.

My preview of the this year’s Downtown Palatine Street Fest, which includes profiles of The Smithereens and The Bad Examples, is currently up on the TribLocal blog. Hopefully it will be in the printed edition of TribLocal that’s included as an insert in Thursday’s Chicago Tribune.

Note: this review originally appeared in the Illinois Entertainer.

The Smithereens did such a bang up job of updating the spirit of 1960s style rock on their debut Especially For You, it should come as no surprise to find them continuing in that vein on the follow-up. Green Thoughts, with producer/musician Don Dixon back at the controls, offers more of the catchy melodies and ringing guitars that have made The Smithereens a favorite of power pop fans since their EP, Beauty And Sadness was released five years ago.

Lead singer Pat DiNizio shows his usual flair for songwriting, switching from hard-hitting numbers like “The World We Know” and “Only A Memory,” which features Marti Jones on back-up vocals, to the lighter “Something New” and “Elaine.” None of these tracks have the immediate impact of “Blood And Roses,” which fueled the massive success of Especially For You, but there’s still plenty of fun on Green Thoughts.

What a nice review! You may find it interesting that Spoon's Britt Daniel was a fan of The Smithereens and covered "Only a Memory" and "The World We Know" in his first band, The Zygotes, in which I was the drummer. In the summer of '88 we all traveled to Austin to see the band on the GREEN THOUGHTS tour and had a blast. We were right down front of the thigh-high stage, and a feisty friend of Britt's kept setting his empty Coke can between the feet of prancing bassist Mike Mesaros. Mesaros didn't miss a lick, repeatedly kicking the can away as the feisty one kept up the fun.