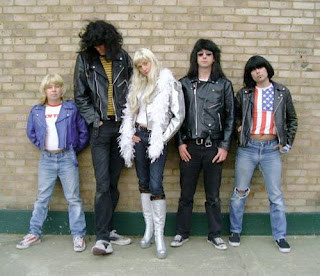 Gabba Gabba - - - Hey This Is Funny! Kudos to Chicago musician Brian Wade Dunn for posting a Facebook link to the GABBA page on MySpace. Mashing the manic Gabba Gabba Hey spirit of The Ramones with the melodic high drama of ABBA is an extremely clever concept, and GABBA, which lists its members as Geeky, Anneky, Bjoey Bee Bee, and Abby, pulls it off perfectly on “The Pinhead Takes It All,” “SOS,” and “Mama Mia.” The band’s debut Leave Stockholm is now available.

Time For Go Time. In addition to its admirable devotion to posting rock stars’ birthdays on Facebook, the Chicago power pop band Go Time creates hard-edged, melodic songs like “Rust To Rust” and “Broken Retrofit.” The band will be performing Saturday night at Silvie’s Rock Room on Irving Park Road on Chicago’s north side. The show starts at 10:00 PM.

Give The Finger A Round Of Applause. Palatine-based techno rockers Dot Dot Dot have created an oddly animated and funny video for their radio friendly tune “Around The World (And Back).” The band members are represented by fingers that perform and visit famous sites around the globe.

Sad News. Michael Been, the lead vocalist for the 1980s band The Call, suffered a fatal hear attack while working as a sound engineer at a concert in Belgium last night. Previous to his work with The Call, Been performed as part of the Chicago bands Aorta and Lovecraft. His powerful vocals were most memorable on The Call’s pummeling early hit, “When The Walls Came Down,” which featured members of The Band, and the later, inspirational tribute to everyday people around the world, “Let The Day Begin.”

Rocking In Palatine. The Mint Julep Room in downtown Palatine continues to pursue an eclectic booking policy that includes jazz, blues, and rock artists on Friday and Saturday nights. Tonight, the venue hosts Liz Mandville, a powerful singer-guitarist who has released four critically acclaimed CDs. Mandville has played the Chicago Blues Fest, and has had gigs across America and in Europe. She’s an engaging performer who actively seeks to connect with her audience. Tomorrow night, the band Triadd drops by for a night of acoustic rock covers graced with Crosby, Stills, & Nash style harmonies. Triadd will also be at The Mint Julep Room, which serves sandwiches, pizza, and salads, on September 3rd.

Isn’t He Romantic? Brad Elvis of The Handcuffs will be traveling to the Atlantic City Hilton Casino Resort in New Jersey next Friday for one of his regular gigs as the drummer for The Romantics. Meanwhile, Brad and vocalist Chloe F. Orwell are putting the finishing touches on the next CD from The Handcuffs.

Round and Round. Singer-songwriters Dean Milano, Jay Whitehouse. Shelley Orbach, Jordi Kleiner, and Melanie Budd will be performing The Song Circle at the North Shore Unitarian Church in Bannockburn, Illinois tomorrow night, from 7:30PM to 10:00PM. The Two Lifejackets Theater Company will be adding comedy sketches to the proceedings. Suggested donation is $7.00.

Back To School Promotion. Las Divas Promotions will be sponsoring an Old School Metal and Punk event featuring a DJ spinning vintage vinyl at The Exit (appropriately enough) in Chicago tomorrow night. The mayhem starts at 10:00PM and runs through 4:00AM.

Hippie Hippie Shake. And don’t forget, Abbie Fest XXII kicks off tonight at the Mary-Arrchie Theatre on Chicago’s north side. It’s a weekend-long wild ride with Abbie Hoffman impersonator and Mary-Arrchie Artistic Director Rich Cotovsky at the wheel. Tonight’s highlights include Rush Pearson’s amazing one-man show, Diary Of A Madman at 8:00PM, Mary-Arrchie’s Gas Mask 101 at 10:00PM, and for those either willing to spend the night or get up very early in the morning, A Red Orchid Theatre’s Oil Talk, at 5:00AM.