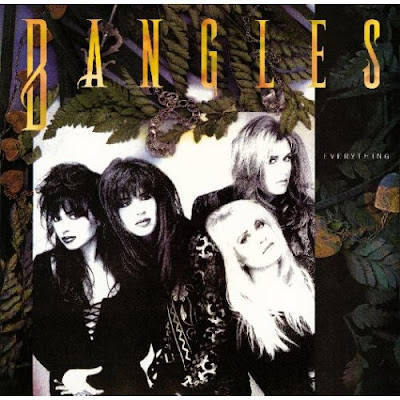 This is a regular feature where I present a review or article I wrote in the near or distant past. It takes its name from a line in a sketch Dave Drazin once wrote for the Famous In The Future comedy group. This time, it’s a review of The Bangles' Everything album that ran in the Illinois Entertainer back in 1988. Funny how back then, I wasn’t sure “Eternal Flame” would be a hit. (It still wouldn't make a Top Ten of my favorite songs by the band.) The Bangles are currently working with Matthew Sweet on a new CD, hopefully to be released sometime this year or early 2011.

Considering the amount of airtime The Bangles have racked up on MTV over the past few years with videos from their second album, Different Light, it may be difficult for some people to remember that the band had released an impressive debut in All Over The Place long before Prince handed them the keys to stardom with “Manic Monday.” The major task facing The Bangles in recording Everything was to keep that success from diluting their ability to create catchy pop songs with heaven-sent harmonies. The band has met that challenge head on, with members writing or co-writing all 13 tracks.

“In Your Room,” the opening cut and the first single, gets things off to a shaky start. It’s not a bad song, but it’s so obviously calculated to please the teeny boppers who have recently jumped on The Bangles bandwagon, it’s bound to leave long-time fans in the cold. By contrast, “Some Dreams Come True” finds the band happily oblivious to its newfound status and performing a harmonica driven gem. Fortunately, most of the songs on Everything fall into the latter category.

The album offers a variety of styles that work well, from the hard-edged “Bell Jar” and “Crash And Burn” to the more introspective “Something To Believe In.” There’s also a touch of psychedelia in “Watching The Sky.” The success of “Eternal Flame” will depend on people’s tolerance of Susanna Hoffs playing coy. All in all, Everything proves that not only are The Bangles still fun, they’re a courageous band as well.