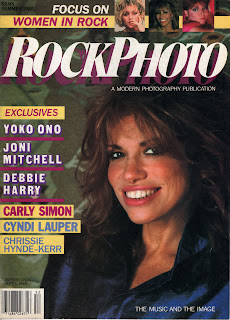 The entire second issue of ROCK PHOTO was devoted to Women In Rock, and included full-length articles on Madonna, Pat Benatar, Carly Simon, Tina Turner, Yoko Ono, Joni Mitchell, Debbie Harry, Cyndi Lauper, Joan Jett, and Chrissie Hynde. Published by ABC Leisure Magazines as a hip offshoot of Modern Photography, ROCK PHOTO was a “special publication” that apparently came out four times a year. This is the Summer of 1985 issue. The premiere edition, according to a front page introduction, had offered a “Focus On Ten Top Photo Pros” with profiles on Bob Gruen, Lynn Goldsmith, Ebet Roberts, and others.

Gruen served as the magazine’s Photo Editor, and he, along with Editor Roman Kozak, and Art Director Leslie Johnson, placed a heavy emphasis on eye-popping snapshots and trendy layouts. The Carly Simon piece is graced with 13 photos of the lissome rock star, and picture this: Debbie Harry has 11. An interview with Yoko Ono is accompanied by a Gruen shot of her playing the white piano John Lennon had given her, and Gruen also captured Tina Turner frolicking by the Eiffel Tower. Paul Natkin contributed a shot of Chrissie Hynde wielding her guitar at a Chicago concert, and he noted in a sidebar, “She jumps about a lot and is very active. I think she is a great performer.” An interview with Joni Mitchell showcases some of her own photography.

ROCK PHOTO also offered Technical Tips from Catherine Calhoun about how to take an effective headshot, with advice on makeup, what to wear, lighting, background, and finishing touches. There was a guide to ensuring your new camera works properly, and a few pages on Rock ‘n’ Roll, Fashion ‘n’ Style. Another article honored women in front of and behind the camera, such as Friday Night Videos Programming Director Bette Hissiger, as well as MTV video jocks Martha Quinn and Nina Blackwood. There was a two-page spread titled New Women In Rock with photos of The Bangles, Sade, Aimee Mann with ‘Til Tuesday, Lita Ford, Tracey Ullman, and Natalie Merchant.

25 years later, most of the artists featured in the ROCK PHOTO Women In Rock issue are still going strong, which stands as a testament to their talent, as well as the magazine’s taste in music.

I have this Magazine and it is wonderful! I believe the Carly Simon content is written by her photographer brother Peter Simon