Something Rocking This Way Comes 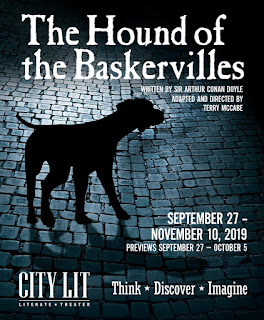 It’s that time of year when spooky-themed entertainment drifts across Chicago like a fog on the Scottish moor. And whether you’re already in the Halloween spirit or prefer to wait until we’re closer to October 31, there are numerous events coming your way. The choices include live rock, classical music, films, masquerade, and outdoor revelry. Here are some suggestions:

City Lit Theater Company is currently staging a production based on the most frightening of all the Sherlock Holmes novels—The Hound Of The Baskervilles. It runs through November 10. City Lit Theater is located at 1020 W. Bryn Mawr in Chicago.

Durty Nellie’s in Palatine is hosting Wizardfest – A Harry Potter Themed Pop-Up Party presented by Popular Party Tours tomorrow night from 7:30 to 11:00 p.m. Activities include dancing, a costume contest, trivia, photo booth, Halloween egg hunt for cash prizes, and a chance to win a Sweepstakes Grand Prize trip to London for two. It’s a 21 and over event, with prices ranging from $15 to for general admission to $50 for table for four.

Elgin’s downtown area will once again become a safe zone to escape zombies when the annual Nightmare On Chicago Street returns this Saturday, October 19. That might seem a bit early for a Halloween festival, but it’s always good to get a head start on the living dead. In addition to live music and food vendors, there will be other fun activities, including the world premiere of two independent horror films. This Zombie For Hire was written and directed by David Metzger and Song Of The Dead was written and directed by Jeff Kelley. I had a blast being in the cast for each flick. No one under the age of 17 will be allowed into Nightmare On Chicago Street unless accompanied by an adult.

Music fans who come to the Chop Shop on Thursday, October 24, can participate in a costume party along with checking out four live bands. Pelafina, Bad Candy, The Locals, and the Cincinnati-based Here Come Here. The Locals will be showcasing songs from their emotionally charged new album Minutes, Seconds, Degrees. The music starts at 8:00 p.m. Chop Shop is located at 2033 W. North Avenue in Chicago.

Montrose Saloon is the place to be for this year’s Halloweekend, a fun tradition where local bands perform as famous rock stars and often dress up like them. On Friday, October 25, the lineup is Los Gallos Band as Los Lobos; Roxy Morons as Roxy Muisc; The Webstirs as The Doobie Brothers; Androgynous Mustache as Hall and Oates; and Fiction Romantics as The Buzzcocks. On Saturday, October 26, Phil Angotti promises to go wandering as Bob Dylan; and he’ll be followed by Planet Claire as Neil Diamond; Statutes Of Liberty as Velvet Underground; Rachel Drew as Siouxsie and The Banshees; and The Stone Montroses as the Stone Roses. Obviously, some of these band names are pseudonyms for performers who play the Chicago club scene under their regular names. So in a way, you don’t know who’ll find at Montrose Saloon on Halloweekend.

The town of Long Grove, once a popular destination for antiques, crafts, and gifts items, is showing signs of successfully reinventing itself after going through some tough times. Restaurants and coffee places are now leading the way. Long Grove will transform itself into a Halloween Town from October 23 through October 27.

The 7th Annual Halloween ComicFest takes place on October 26, with participating comic stores offering candy and free comics. Patrons are encouraged to wear costumes. Check with your favorite comic store to see if it plans on being part of the fun.

The Music Box will be screening The Rocky Horror Picture Show at midnight on Friday, October 25 and Saturday, October 26; and at 10:00 p.m. on Wednesday, October 30 and Halloween. Audience members are encouraged to participate.

The Chicago Philharmonic will provide a live soundtrack when Tim Burton’s The Nightmare Before Christmas is screened at the Auditorium Theatre in downtown Chicago on Halloween and the next night, November 1.
Posted by Terry Flamm at 9:21 PM