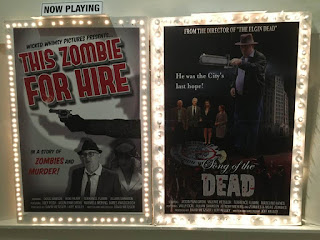 For those who like getting their frights through professional drama, a Chris Jones review in today’s Chicago Tribune points to A Red Orchid Theatre’s current production of Grey House. Written by Chicago playwright Levi Holloway, Grey House shows what happens when a couple takes refuge in an isolated cabin inhabited by mysterious young girls and their equally unsettling mother. A Red Orchid Theatre is located at 1531 N. Wells Street; Grey House runs through December 1.

Music fans who come to the Chop Shop on Thursday, October 24, can participate in a costume party along with checking out four live bands: Pelafina, Bad Candy, The Locals, and the Cincinnati-based Here Come Here. The Locals will be showcasing songs from their emotionally charged new album Minutes, Seconds, Degrees. The music starts at 8:00 p.m. Chop Shop is located at 2033 W. North Avenue in Chicago.

Durty Nellie’s in Palatine has an event titled The Ghosts Of Rock Icons Past featuring Modern Day Romeos coming up this Saturday. Attendees are encouraged to dress up as a famous rock star who’s no longer among the living, and there’s a costume contest with over $500 in prizes.

If scary and comedic short flicks are your thing, director-writer David Metzger’s This Zombie For Hire and director-writer Jeff Kelley’s Song Of The Dead can now be watched on YouTube. The films were screened this past Saturday night as part of Elgin’s annual Nightmare On Chicago Street Halloween festival. Full disclosure: I acted in both of these films.
Posted by Terry Flamm at 9:37 PM