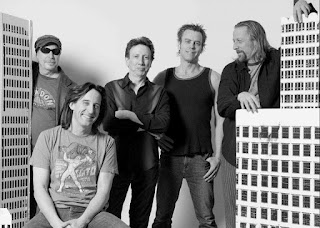 The Bad Examples will be at Hey Nonny in Arlington Heights this Friday.

The Rock And Roll Hall Of Fame has revealed its list of 16 nominees to be inducted in 2020, sparking the usual debate over who’s worthy, who’s unworthy, and who’s so much better than any of them but never gets nominated. Some rock music fans have long since opted out of even caring about Rock And Roll Hall Of Fame. I’ve taken a more positive view since The Hollies were inducted in 2010, but it’s easy to understand people’s frustration. So, five of these following nominees will be chosen to join the RRHF club next year. Notorious B.I.G.; Rufus featuring Chaka Khan; Depeche Mode; Thin Lizzy; Judas Priest; Todd Rundgren; MC5; Soundgarden; Pat Benatar; Dave Matthews Band; Whitney Houston; Kraftwerk; The Doobie Brothers; T. Rex; Motorhead; and Nine Inch Nails. A case could be made that each of them was influential in its chosen genre. My votes would go for Todd Rundgren; MC5; Depeche Mode; T. Rex; and Thin Lizzy.

The Bad Examples, who would easily be inducted if there was a Chicago rock band hall of fame, are coming to Hey Nonny this Friday. It’s another sign the Arlington Heights restaurant-music venue is interested in booking acts from Chicago’s vibrant club scene. The Bad Examples can rock out with songs like the funny and hard-hitting “Not Dead Yet” and also create smooth Squeeze-style pop like “Pictures Of A Masquerade” and “Jayne Left Behind.”

Durty Nellie’s in Palatine is hosting Wizardfest – A Harry Potter Themed Pop-Up Party presented by Popular Party Tours this Friday night from 7:30 to 11:00 p.m. Activities include dancing, a costume contest, trivia, photo booth, Halloween egg hunt for cash prizes, and a chance to win a Sweepstakes Grand Prize trip to London for two. It’s a 21 and over event, with prices ranging from $15 to for general admission to $50 for table for four.
Posted by Terry Flamm at 9:49 PM