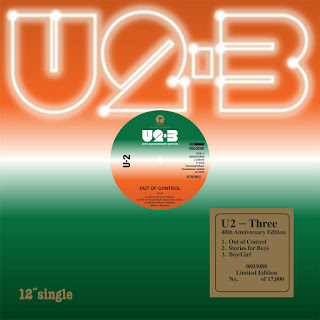 America sends its Regrettes. Having released How Do You Love? as a worthy follow-up to their  debut album Feel Your Feelings Fool, The Regrettes are touring the globe. They’re in Chicago tonight for a concert at Metro, and they have upcoming dates in Ireland, England, France, Germany and Japan. The Los Angeles-based band expertly mixes authentic punk with the 1960s girl group sound even though none of its members are old enough to have experienced either of those eras.

The Rock And Roll Hall Of Fame is scheduled to announce the nominees to be inducted in 2020 this coming Tuesday. Expect the usual outrage over which nominees are completely unworthy and which rock acts have been neglected for far too long. Not that there isn’t some merit to those comments. A couple of recommendations for induction off the top of my head would be Squeeze and The Bangles.

The Bad Examples have a show coming up next Friday, October 18 at Hey Nonny in Arlington Heights. Once again, it’s encouraging to see this new venue tapping into some of the Chicago area’s best rock and roll acts for its bookings.

Congratulations to the Graham Crackers Comics location at 77 E. Madison on 20 years of doing business in downtown Chicago. The store has a sale running through this weekend.

Chris Hillman from The Byrds and The Flying Burrito Brothers will be performing with noted studio Herb Pedersen at The Old Town School Of Folk Music this Sunday night.

Morning Glory On The Vine, a book featuring Joni Mitchell’s art, poetry, and lyrics, is now available for pre-order on Amazon. It’s based on a book Mitchell personally created for a number of friends back in 1971. In other Mitchell news, a double LP version of Jonie 75: A Birthday Celebration, which features various famous musicians in concert paying tribute to the iconic singer-songwriter, will be among this year’s Black Friday Record Store Day treasures.

The Haymarket Opera Company will perform John Frederick Lampe’s 1737 work The Dragon of Wantley at the Studebaker Theater on Michigan Avenue on October 27 at 5:30 p.m. and October 29 at 7:30 p.m. Haymarket promises, “beguiling music, cleverly ridiculous poetry, thrilling spectacle,” with ticket prices starting at $30.

It was nice to see a photo Ray and Dave Davies together at a London bash marking the 50th Anniversary of The Kinks’ groundbreaking rock opera Arthur - Or The Decline And Fall Of The British Empire. Arthur will be available on October 25 in various CD and vinyl formats.

The 2019 Chicago TARDIS Doctor Who convention will field an impressive roster of celebrity guests when it takes place November 29 – December 1 at the Westin Chicago Lombard. Paul McGann; Sylvester McCoy; Arthur Darville; Tosin Cole; Katy Manning; and Louise Jameson are among those who will be there.

If the critically acclaimed Linda Ronstadt: The Sound Of My Voice documentary is on your wish list, you can catch it at the Gene Siskel Film Center November 1 through 7.

Professor Moptop presented his The Beatles’ Abbey Road 50th Anniversary lecture at the Palatine Library last week and it proved to be as interesting and entertaining as his regular contributions to Terri Hemmert’s Sunday morning Breakfast With The Beatles program on WXRT. He had copies of his Textbook Beatles Volume One and the very recently released Volume Two for sale after the presentation. Both books are filled with well-researched Beatles history, trivia, and a lots of fun photographs.

The 55th Annual Chicago International Film Festival gets under way next Wednesday, October 16 and will run through October 27 at AMC River East 21. The official 56-page program, with the complete schedule arranged by genre and featuring a brief description of each film, is available at the Gene Siskel Film Center and other place around Chicago.

BWiFF, the Blue Whiskey Independent Film Festival, will present the 1919 Cinema Centennial – Celebrating 100 Years Of Cinema at the Music Box Theatre on October 23 at 7:00 p.m.

The Bensenville Arts Council and Bensenville Community Foundation are sponsoring the very first Bensenville Short Film Festival on November 13 at the Bensenville Theatre. The deadline for submissions is October 13 and there is a $10 admission fee. Films should be no longer than 15 minutes.

Elgin’s downtown area will once again be overrun with zombies as part of the annual Nightmare On Chicago Street Halloween Festival . In addition to the roaming flesh-eaters, there will lots of entertainment; including Me-TV’s Svengoolie; DJs; live bands; and a costume contest. If you can claw your way through the mayhem, you might find a storefront theater where Jeff Kelley and Dave Metzger will each be screening an original horror film. I have an acting role in each of them.
Posted by Terry Flamm at 8:41 PM