Lin’s Been Our Best Friend For 35 Years 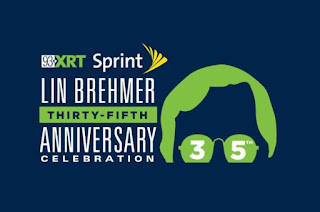 This past August marked the 10th anniversary of Broken Hearted Toy. One of the first posts I did in August 2009 was about a WXRT event celebrating the birthday of its morning DJ Lin Brehmer. Back then, I noted that Brehmer, who’s always assured his listeners he’s their best friend in the whole world, offered a refreshing alternative to the obnoxious humor served up by typical rock ‘n’ roll morning drive-time types. Whether he’s lamenting a frustrating Cubs game; relating how he mispronounced Bono’s name in an early interview with the U2 frontman; or recalling the time he brought the Australian garage rock band The Hoodoo Gurus home at 3:00 a.m. (much to his wife’s dismay), Brehmer exudes a one-of-the-guys persona

Ten years later, he probably has more best friends than ever. WXRT and Sprint are throwing a Brehmer bash tomorrow night, but this time it’s to celebrate his 35th anniversary of working at the station. Los Lobos are scheduled to perform, and it seems likely a number of Brehmer’s peers, along with special guests, will take the stage to share their favorite tales about him. I met Brehmer for the first time at that birthday party in 2009, and we’ve talked at enough WXRT events since then that when he saw me at City Winery Chicago earlier this year, he grinned and exclaimed, “Flamm!” That might have something to do with my nephew Joe Flamm winning Top Chef on Bravo—Brehmer’s definitely a foodie—but it sure seemed like something a best friend would do. Congratulations, Lin.

NOTE: As far as I know, the only available tickets for this event were given away at Sprint stores a while back.
Posted by Terry Flamm at 8:10 PM