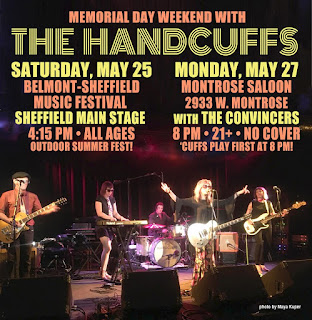 Memorial Day weekend is often seen as the unofficial start of summer, and this year, Chicagoans have a street festival with one of the city’s best bands to help us celebrate. The Belmont-Sheffield Music Festival runs Saturday and Sunday, with the highlight being a 4:15 p.m. show by The Handcuffs on Saturday. Led by vocalist-guitarist Chloe F. Orwell and drummer Brad Elvis (who’s also a member of The Romantics) the band has recorded three impressive albums filled with catchy indie rock songs. They’re currently wrapping up a new album, so there’s a good chance we’ll be hearing some new songs at the Belmont-Sheffield Music Festival. Two days later, you can catch The Handcuffs at Montrose Saloon on Chicago’s north side.

This year’s lineup for Fest For Beatles Fans - Chicago (August 10 – 12) has been announced, and while it’s disappointing The Zombies aren’t among the guests—they were at the NY Fest edition—there’s still plenty to like. Alan White, who was a member of Rock And Roll Hall Of Fame inductees Yes, will be making his Fest - Chicago debut. White was also among the noted musicians who joined John Lennon and Yoko Ono at the 1969 Toronto Rock And Roll Festival, and helped out on George Harrison’s All Thing Must Pass album.

Jeremy Clyde has performed at The Fest with Chad and Jeremy partner Chad Stuart, as well as Peter Asher. This year, he’s going solo, backed a guitarist, cellist, and violinist. Other celebrity guests include former Wings members Steve Holley, Laurence Juber, and Denny Laine, and former Apple Records manager Ken Mansfield. The Beatles tribute band Liverpool will be back again, along with The Weeklings, who mix obscure Beatles songs with catchy, British Invasion-flavored originals.
Posted by Terry Flamm at 9:24 PM