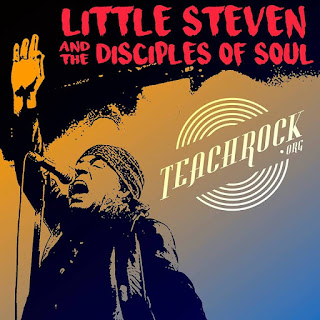 I’d to extend a warm welcome to Steven Van Zandt, who’s in town with his Disciples Of Soul band for a WXRT Holiday Concert tonight at The Copernicus Center on the northwest side. (It’s a short walk from the Jefferson Park Metra/CTA hub.) He dropped by the FM radio station earlier today for a visit with morning DJ Lin Brehmer. Van Zandt is a long-time member of Bruce Springsteen’s E-Street Band, a successful solo artist, actor, radio show host, and more recently, a champion of educators.

There was an interesting article about him by writer Jeff Elbel in last Friday’s Chicago Sun-Times. In addition to Van Zandt’s current Soulfire Teacher Solidarity Tour, it focused on his TeachRock.org initiative. The idea is for teachers to use music to reach students who might otherwise drop out. Each concert on the tour offers free tickets to teachers who contact the TeachRock website.

The Bad Examples have a special event coming up this Saturday, November 10 at Two Brothers Roundhouse in Aurora to celebrate the life of Donna Heaney. An early supporter of the Chicago-based band who helped with the creation of buttons and flyers, Heaney passed away recently. I still have one of the Bad Examples buttons lead vocalist Ralph Covert was giving out at an Illinois Entertainer event at Metro several years ago, but I’m not sure if it was one of the originals.

Love, Gilda, director Lisa Apolito’s 2018 documentary about Saturday Night Live pioneer Gilda Radner, is currently running at the Gene Siskel Center. The 90-minute film will be screened each night through this Thursday, November 8.

The Sting Police, a tribute band that covers the music of Sting and The Police, has a gig coming up on November 16 at the Metropolitan Arts Centre in Arlington Heights. Looking ahead to early 2019, that same venue will present Marrakesh Express – A Crosby, Stills, Nash and Young Experience on January 18.

According to a UK organization called The Official Charts Co., the honor for recording the most popular British album ever goes to The Beatles for their 1967 masterpiece Sgt. Pepper’s Lonely Hearts Club Band.
Posted by Terry Flamm at 8:54 PM