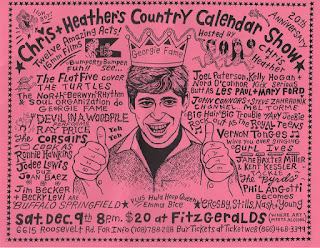 Christmas is just over two weeks away, and if you’re like me, you haven’t finished decorating, gift buying, or sending cards. You still have to bring out your favorite rock and roll holiday CDs and start the rotation of seasonal DVDs, saving A Charlie Brown Christmas and The Snowman for last. And on top of all that, there’s a bunch of entertainment stuff to keep up with.

Chris Ligon and Heather McAdams have enlisted several area musicians to help out with their 20th Anniversary Calendar Show tomorrow night at FitzGerald’s in Berwyn. The guests’ performances tie in with the illustrations in McAdams’ imaginatively illustrated calendar and will include The Flat Five as The Turtles; Devil In A Woodpile as Ray Price; and Jodee Lewis as Joan Baez. Vernon Tonges will take on Burl Ives;, Big Hair Trouble will be The Royal Teens; The Corsairs will be Ronnie Hawkins; Phil Angotti will cover Crosby, Stills and Nash; Jim Becker and Becky Levi will be Buffalo Springfield; Jane Baxter Miller and Kent Kessler will sing like The Byrds; and Joel Patterson with Kelly Hogan, and Nora O’Connor will perform as Les Paul and Mary Ford.

The Bucktown Holiday ArtShow takes place tomorrow and Sunday at The Holstein Park Fieldhouse at 2200 N. Oakley. Admission is $2. The Anderson Galleria, at 5247 N. Clark Street, describes itself as, “like an Art Festival under a roof and year-round.” More than 90 local vendors sell handmade items, many of which are likely to have a holiday them around this time of year.

What I like about two. There’s a double bill of The Romantics and The A Flock Of Seagulls at Joe’s on Weed Street in Chicago next Wednesday, December 13.

1-2-3-4-5-6. Jonathan Richman of The Modern Lovers fame will be coming to on SPACE in Evanston on March 14. Tickets are available via the venue’s website. Tickets are also now on sale for Drive-By Truckers at Thalia Hall on April 6 and 7; Keren Ann at City Winery Chicago on February 20; Ty Segal at The Riviera Theatre on April 8; Southside Johnny and The Asbury Jukes at SPACE on March 3; and Steve Winwood at the Chicago Theatre on February 22.

Chris Stamey, who has a successful career as a solo artist as well as being a member of The dBs, has been named as the opening act for The Alejandro Escovedo Band’s three-night stand at City Winery Chicago on January 25 through 27.

Hugh Hart is still creating vital music even as he continues his successful endeavors in journalism. His latest recording, “Bye Bye Donny,” which can be heard on Soundcloud finds Hart setting politically charged lyrics to a catchy arrangement that recalls his 1980s work with his Chicago-based band The OD’d. Hart’s freelance articles have appeared in the New York Times and the Los Angeles Times.

The Social Act, one of the first bands I interviewed for the Illinois Entertainer back in the late 1980s, has been working on a new album, and will be performing at Martyrs’ on Lincoln Avenue next Friday, December 15. Razorhouse will also be on the bill that night.

Belly has been offering some interesting perks on its PledgeMusic page, and the latest is a colorfully illustrated retro design campaign poster.

It’s the time of the holiday season to ask for Odessey And Oracle wall art, pillows, or shower curtains from The Zombies website. The British Invasion band is offering its initially overlooked but now iconic LP in assorted sizes and in various mediums.

It’s also entirely appropriate to ask Santa for rock and roll related books. Here’s a few from my list:
Everything I Know I Learned From Rock Stars by Bill Paige and We Have Company - Four Decades Of Rock And Roll Encounters by Bobby Skafish.

Congratulations to my nephew Joe Flamm on making it through the first elimination round on Top Chef. The cooking reality show opened its latest season last night on Bravo, and it was a kick to watch my godson working his culinary magic among 14 other contestants in Denver.

The Empty Bottle is hosting Warm, Safe and Sound, A Coat/Sweater Drive for Homeless Chicagoans on December 21. Donating a coat or sweater will get you in to see the blues rock band North By North, psychedelic rockers Secret Colours, indie rock band The Handcuffs, and the coed indie pop duo Star Tropics.
Posted by Terry Flamm at 11:18 PM