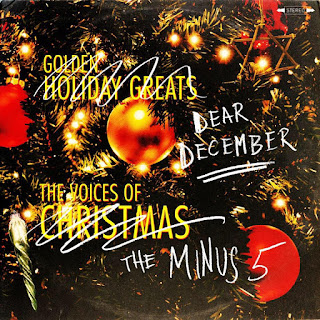 It may be too late to run out to a record store, but here are some options for holiday rock tunes you can find on iTunes, Amazon, Bandcamp, other sites, or on the radio.

Australian vocalist/multi-instrumentalist Joe Algeri, AKA The JAC, continues his annual tradition of creating an original Christmas song for free download with “A Petty Xmas (Parts 1 and 2).” This year’s edition is a bit more serious, as Algeri honors not only the late Tom Petty but also George Young, who played rhythm guitar for The Easybeats and later produced AC/DC albums. George and his brother/AC/DC co-fonder Malcolm both passed away this year. “A Petty Xmas (Parts 1 and 2)” has a catchy mid-tempo arrangement that features Algeri on lead vocals and guitars, along with fellow Britannicas members Herb Eimerman on jazz bass and backing vocals; and Stefan Johansson on drums. Five other musicians are involved with this worthy project.

Christmas With The Smithereens is one of the best rock holiday albums ever recorded, featuring an energetic mix of originals and cover tunes. Sadly, lead vocalist-guitarist Pat DiNizio also left us this year. The band is asking fans who would like to express their condolences to DiNizio’s mother to send their cards or messages to: The Smithereens P.O. Box 307 Tennent, NJ 07763.

WXRT’s final Local Anesthetic Holiday Spectacular will be rebroadcast on Christmas Eve at 10:00 p.m. Several short seasonal messages and songs from area musicians comprise the show and it’s always fun to hear what the participants come up with. Just to clear up any confusion, Local Anesthetic host Richard Milne has not left the station, and will continue in his regular time slots. Milne recently became part of the rotating trio of hosts for XRT’s Saturday Morning Flashback.
Posted by Terry Flamm at 9:07 PM