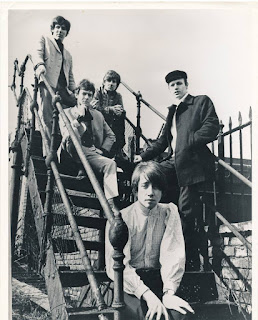 Tony Hicks is at the bottom of the steps in this vintage Hollies pic.

A happy belated birthday to guitarist-harmony vocalist Tony Hicks of The Hollies. Hicks has played an essential role in the band’s distinctive and effervescent sound from the start and still tours across Europe with the current lineup, along with original drummer Bobby Elliott.

Graham Nash, who performed with Hicks in The Hollies through 1969, will be at the North Shore Center For the Performing Arts on March 17, 2018. In the past few years, Nash has performed in the Chicago area at The Arcada in St. Charles; City Winery Chicago; and The Old Town School Of Folk Music. And he’s always welcome.

I got my first Hollies album as a Christmas present back in 1966 and have been hooked since.

Richard Milne’s Local Anesthetic Holiday Spectacular on WXRT has been an annual tradition among fans of Chicago area rock for several years. But the very last one is this Sunday night at 8:00 pm., with a repeat airing on Christmas Eve. Several short seasonal messages and songs from area musicians comprise the show and it’s always fun to hear what the participants come up with. A toast to Mr. Milne for the decades he supported Chicago music on his weekly Local Anesthetic show.

The Empty Bottle is hosting Warm, Safe and Sound, A Coat/Sweater Drive for Homeless Chicagoans next Thursday, December 21. Donating a coat or sweater will get you in to see the blues rock band North By North, psychedelic rockers Secret Colours, indie rock band The Handcuffs, and the coed indie pop duo Star Tropics. On December 22 at FitzGerald’s, the annual Redmonds Christmas Show will will feature hosts The Redmonds and their guests Kevin Lee And The Kings, Duct Tape Band, and The Romeo Brothers. On the next night, December 23, there’s Flirting With Time: A Tribute To Tom Petty. Proceeds will benefit the One America Appeal Hurricane Charity.

Congratulations to 2018 Rock And Roll Hall Of Fame Inductees The Cars, Dire Straits, The Moody Blues, Nina Simone, Bon Jovi, and Sister Rosetta Tharpe. I wanted The Zombies to make it in this year, but I also had Dire Straits, The Cars, and The Moody Blues on my wish list. American fans can make it up to The Zombies by seeing the band on its 2018 tour. They’ll be at City Winery Chicago on March 19.

The Go-Go’s recently shared a link on Twitter to a Variety article about the band’s Head Over Heels musical coming to Broadway at some point in 2018 or 2019. Gwyneth Paltrow is slated as the producer.

My nephew Joe Flamm’s adventure as one of the contestants on the new season of the Bravo Channel’s Top Chef continued in fine fashion this past Thursday as he won the Quick Fire event and earned immunity for the second elimination round.

Several local acts are lined up for the 13th Alex Chilton Birthday Bash! coming up on December 28 at the Empty Bottle. Sponsored by the WNUR radio show Power Pop Shoppe, the event will include The Injured Parties, Dann Morr, Hannah Frank Group, and Falling Stars.

I mentioned in my Thursday post about Pat DiNizio that I first heard about his passing away early morning on WXRT. That was when overnight DJ Emma Mac was still on the air and she broke the news. Later that day, the station’s morning air personality Lin Brehmer offered a touching tribute that has been shared on The Smithereens Official Facebook page and by others.
Posted by Terry Flamm at 10:35 PM