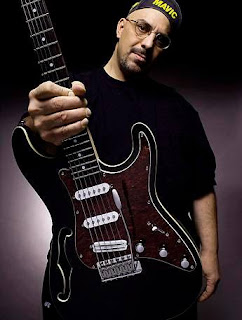 Listening to WXRT early yesterday morning, I heard the sad news that Pat DiNizio from The Smithereens had died. I first discovered The Smithereens back in 1983 via a Rolling Stone review of their Beauty And Sadness five-song EP. I mentioned the record to fellow power pop fanatic “Boris” during one of the many times we ran into each other at the Haywires club, and learned they were already on his radar too. Many will mourn DiNizio’s passing not only as fans but as friends who connected with him on a personal level over the years.

I can’t remember ever going to a Smithereens concert where they didn’t come out afterwards to chat, pose for pictures, and sign autographs. And I probably saw them more times than any other group. I doubt they were able to remember all of us from one concert to the next, but DiNizio, guitarist-vocalist Jim Babjak, drummer-vocalist Dennis Diken, bassist-vocalist Mike Mesaros (and later, bassist-vocalist The Thrilla) were always genuinely friendly. I would bring things for them to sign that would prove my loyalty. When I handed DiNizio my vinyl copy of Beauty And Sadness after one show, he laughed, turned to his fellow musicians and asked, “Where do they find this stuff?”

The music DiNizio wrote and performed with The Smithereens was a workingman’s power pop with energy and an unerring sense of melody. The ominous “Blood And Roses” from Especially For You brought them national attention and they scored big with songs like ‘Strangers When Me Meet,” “Behind The Wall Of Sleep,” “A Girl Like You,” “Only A Memory,” and “Drown In My Own Tears.” In 2011, they recorded The Smithereens 2011, which found the band still at its peak with catchy songs like “Sorry,” “Rings On Her Fingers,” and “What Went Wrong.” The Smithereens remained a dynamic live act through 2017, and had plans to tour next year.
Posted by Terry Flamm at 9:34 PM