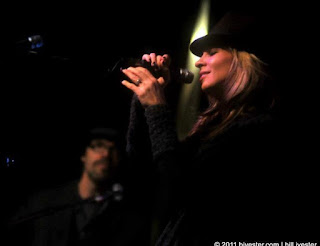 New Year’s Eve is only two days away, so here are some suggestions for people in the Chicago area who haven’t made plans yet.

The Cincinnati-based alt rock/roots band Over The Rhine will be playing songs from their critically acclaimed albums at The Old Town School Of Folk Music. Founding members/spouses Linford Detweiler and Karin Bergquist craft inventive arrangements and Bergquist’s amazing vocals bring the provocative lyrics to life. Journalist Jef Elbel has an interesting interview with Detweiler in the Agenda section of today’s Chicago Sun-Times.

From RSD to NYE. There’ll be no cover charge when Laurie’s Planet Of Sound holds its annual New Year’s Eve party at Ricochets Tavern on Lincoln Avenue. The record store throws great Record Store Day bashes every April, so why not check out how they’ll ring in 2018. DJ Samorama is in charge of the music and there’s free champagne at midnight. The party starts at 9:00 p.m.

The BoDeans perform the first of two gigs at City Winery Chicago on New Year’s Eve, with the second one coming on January 1. The Wisconsin-based band has lots of catchy, fun material to draw from, including “Closer To Free,” “Fadeaway,” and “She’s A Runaway.”

Guided By Voices, whose distinctive brand of alt rock/power pop has attracted a devoted following for several years now, will be performing at The Empty Bottle on Western Avenue on the north side.

WXRT (93.1 FM) overnight air personality Emma Mac, who usually holds down the oversight shift, will switch hours in order to host the station’s commercial-free 93 Best Party Songs programming. It kicks off at 7:00 p.m. and runs through midnight.

And in other entertainment news:

If you got money or a gift card for the holiday and are looking for a rock and roll way to spend it, how about On Air, a new two-CD release of live recordings by The Rolling Stones at the BBC between 1963 and 1965. It includes eight tracks that were never released or recorded commercially.

Cliff Johnson and The Raine and The Jay Geoppner Band will be performing at FitzGerald’s in Berwyn on Saturday, January 6. Later next month at FitzGerald’s, Classic Tribute Night on January 18 will feature Phil Angotti performing The Rolling Stones’ Out Of Our Heads; Rachel Drew performing Amy Winehouse’s Back To Black; and North Berwyn Rhythm And Soul Organization performing as a mystery guest.

Sons Of The Silent Age, the David Bowie tribute act composed of several Chicago music scene veterans, will have acclaimed actor Michael Shannon as their special guest when they perform The Berlin Years on January 6 at Metro.

The official trailer for Metric’s 2018 Dreams So Real concert film can now be seen on YouTube. Fans can preorder Dreams So Real on DVD and Blu Ray or as a three-LP set on the band’s PledgeMusic site.  Various bundles featuring a t-shirt, signed items, liner notes, etc. are also available. Metro vocalist Emily Haines released her third solo effort, Choir Of The Mind, earlier this year and plans to tour in support of it.

The January issue of the Illinois Entertainer is out, with staff members listing their choices for best albums and concerts. Over the twenty-some years I wrote for them, I.E. invited me to participate in this annual ritual a whopping one time. Anyway, it’s nice to see Curt Baran name The Regrettes’ Feel Your Feelings Fool among his top albums and their show at Schubas among his top concerts. Baran and publisher John Vernon both picked Visions Of A Life by Wolf Alice as one of their favorite albums, which increases my interest in buying it.

Meet the new Doc, definitely not the same as the old Doc. Actress Jodie Whittaker officially arrived as the 13th incarnation of The Doctor when the Doctor Who annual Christmas Special aired this past Monday. Whittaker is the first woman to portray the iconic sci-fi character who is able to regenerate and take on an entirely appearance and, to a less degree, persona. Imagine the suspense and surprise among the show’s loyal fans if there was no way of knowing what the new Doctor will look like until the episode aired. Of course, that kind of secrecy would be pretty much impossible these days.

After surviving a tough round in the fourth installment, my nephew Joe Flamm will be among the remaining contestants on the Bravo Channel’s Top Chef as it moves into 2018.
Posted by Terry Flamm at 10:05 PM