Kevin Lee And The Kings - Sticks And Stones 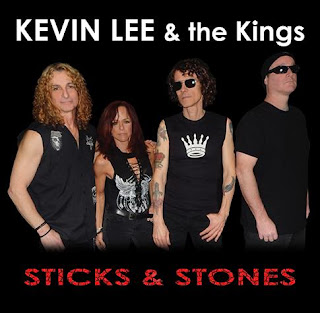 Kevin Lee is a guitar-slinger with an unerring sense of melody, which has resulted in a series of impressive albums over the years. Like fellow Chicagoans Cheap Trick, his songs are an enticing blend of power pop and hard rock, and he’s a strong vocalist as well. The recently released Kevin Lee And The Kings album Sticks And Stones finds Chicago rock veterans guitarist-backing vocalist Michael Kurtz and bassist-backing vocalist Patti Prendergast joining Lee and drummer Erik Strommer for the first time on a recording, but this lineup has been gigging together for a while now.

Lee and Kurtz provide plenty of firepower as the band zips through 10 songs, with “Tell The Truth”—a tale of a troubled relationship—being the only slow one. The well-crafted arrangements are consistently catchy and Lee gets solid vocal support from Kurtz And Prendergast. “Slip Of The Tongue” takes aim at loose talk and gossip, while “Sticks And Stones” is about trying to get along with someone who constantly criticizes and complains.

Lee strikes a more inspirational tone with the rollicking “On Top Of The World,” and on “One Day At A Time,” a guy tells his commitment-seeking girlfriend it’s better to just take life as it comes. That sentiment also shows up on “All We Have Is Now,” which has more of a garage rock feel. The defiant “Nothing To Lose,” with its high-speed instrumental intro and lush harmonies, serves as the best cut on an album filled with good rock tunes.
Posted by Terry Flamm at 9:27 PM