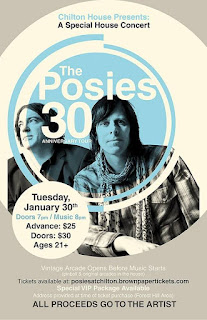 The Posies have big plans for 2018

You’d think having this past Friday off from work would have given me enough time to post a proper Slumgullion, but I spent most of that day roaming around downtown Chicago looking for various Christmas presents. What follows is an odds and sods mix of holiday sentiment, family memories, charity events, and entertainment news. And as Clarence the wingless angel said to St. Joseph in It’s A Wonderful Life, “No, I didn’t have a drink.”

My family celebrated Christmas yesterday at my brother’s house on the south side. His oldest son, my nephew, Joe Flamm has now made it through three rounds of this season’s Top Chef program on the Bravo Channel. Joe was at the gathering yesterday and we gave each other a bottle of wine as a gift. (He’s also my godson.) This is the first Christmas I’ve been able to say I received a present from a contestant on a reality TV show.

It’s always fun when Christmas Eve falls on a Sunday because many of the newspaper comics—or the funnies as some people call them—are about celebrating the holiday. Back when I was a kid, we called the comics “the jokes,” although I haven’t come across any other families that did that. During the past few years, I’ve been clipping some of the better Christmas-related comics and putting them in the same box as our decorations.

My Friday travels around downtown brought me to Water Tower Place on Michigan Avenue, and an exhibit called The Great Fermentation on one of the upper floors. According to a woman I spoke with there who called herself Dr. Shiraz, it’s a preview of a multi-media celebration of wine that might be coming to Chicago (other cities are still in the running) in 2019.

Congratulations to Joe Shanahan, owner of the Metro venue on Chicago’s north side, on already raising over $1,000 via his Facebook fundraiser for the Chicago Children Choir. The CCC is a nonprofit organization that helps kids ages 8 through 18, “become global citizens through music.” It has choral programs in 80 Chicago schools.

Sons Of The Silent Age, the David Bowie tribute act composed of several Chicago music scene veterans, will have acclaimed actor Michael Shannon as their special guest when they perform The Berlin Years on January 6 at Metro. A portion of the proceeds from this event will benefit cancer patients at Northshore University Healthsystem’s Integrative Medicine Program.

A winning team. According to reporter Annie Sweeney’s recent article in the Chicago Tribune, five Chicago sports franchises have joined together to help stop street violence in the city. The Chicago Sports Alliance comprises the Cubs, White Sox, Blackhawks, Bears, and Bulls, and has raised $1 million so far to fund mentoring programs for youths in the Englewood neighborhood.

The Posies plan to celebrate their 30th anniversary in style during 2018 with live performances around the the USA, as well as offering some enticing opportunities via the PledgeMusic site. Depending on how much money you’re willing to shell out, you can choose anything from spending a day with founding members Jon Auer and Ken Stringfellow in Paris to acquiring new deluxe versions of Dear 23, Frosting On The Beater, and Amazing Disgrace for $18 each. Other options include a yet-to-be-designed t-shirt; socks; handwritten lyric sheets; a signed CD box set; a signed LP box set; signed albums and CDs; a signed setlist; a concert in your house with either one or both of the founding members; or having a coffee date with one or both of them. Various packages involve a mix of the above items, and every package includes an access pass.

Auer and Stringfellow will tour as a duo starting in January, and and at some point, as a full band. Upcoming dates include New York, Boston, Memphis, Atlanta, Washington, D.C. and Nashville. They’ll hit City Winery Chicago for a duo show on January 31. VIP packages involving a meet and greet are available.

The rebooted Jumanji movie opened at movie theaters recently. To be the honest, the only reason I’m interested is that the cast includes Karen Gillan, whose Amy Pond was among the most interesting companions to hang out with The Doctor on the long-running English sci-fi series Doctor Who.

Well, I’m off to watch the Alastair Sim version of A Christmas Carol, and if it doesn't get too late, It’s A Wonderful Life. Best holiday wishes to all who visit this blog, along with the hope that we’ll all be successful in our creative projects in the coming year.
Posted by Terry Flamm at 7:58 PM