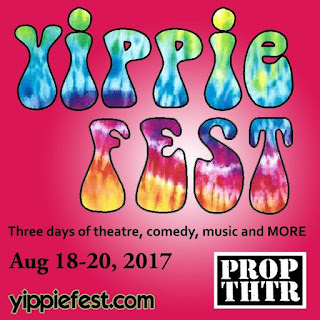 YippieFest, a three-day celebration of theatre, comedy, music, puppets, and other forms of offbeat entertainment, opens tomorrow, August 18 at Prop Thtr on Chicago’s north side. The people behind this brand new event—Frank Carr and Desiree Burcum from the Famous In The Future comedy group, and Carla Hayden and James Moeller from Black Forest Theatre—are veterans of the Abbie Hoffman Died For Our Sins festival that Mary-Arrchie Theatre hosted for 30 years. If they can carry on that same tie-dyed, rebellious spirit Mary-Arrchie Artistic Director Rich Cotovsky, channeling Abbie Hoffman, brought to his annual events, YippieFest will be worth celebrating.

Fans of Abbie Fest will see some familiar faces at its lovechild. In addition to Famous In The Future (full disclosure: I used to be part of this group) and Black Forest, YippieFest will offer Rush Pearson, DB Comedy, David Drazin, and Danger Circus. There will also be plenty of live music, including Moeller and Hayden’s alt rock band whitewolfsonicprincess; The Rut; The Telepaths; Voodoo Asylum; and the Grateful Dead tribute band Trouble Ahead. Tickets are $15 for each night, $25 for the entire weekend.
Posted by Terry Flamm at 10:20 PM