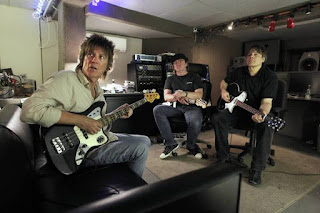 People sometimes call these the dog days of summer but I prefer to employ the more positive Simon and Garfunkel paraphrase, August, Rock She Must. The month traditionally has a lot going on in the Chicago area, and 2017 is no exception. In the next few weeks, we have a power pop showcase with Dwight Twilley, Pezband, and Shoes at The Arcada in St. Charles; Fest For Beatles Fans and Wizard World Comic Con Chicago in Rosemont; and YippieFest and The Chicago Air And Water Show taking place in the city.

The 41st Annual Fest For Beatles Fans - Chicago comes to the Hyatt Regency O’Hare in suburban Rosemont this weekend. The event presents musicians, authors, artists, photographers, and music biz people who have some connection to to the most famous band in rock history. See yesterday’s post for more information.

The Arcada Theatre in St. Charles presents three power pop legends tonight with Pezband, Shoes, and Dwight Twilley. Doors open at 7:00 p.m. See my Wednesday night post for more information. Note: Due to unforeseen circumstances, Cliff Johnson and The Raine will not be performing as part of the show tonight.

YippieFest, a three-day celebration of theatre, comedy, music, puppets, and other forms of entertainment set for next weekend, August 18 – 21 at Prop Thtr. The people behind this brand new event are veterans of the Abbie Hoffman Died For Our Sins festival that Mary-Arrchie Theatre hosted for 30 years.

When Wizard World Comic Con Chicago returns to the Donald E. Stephens Convention Center in Rosemont August 24 through 27, it will be particularly interesting for Doctor Who fans. David Tennant, Alex Kingston, John Barrowman, Catherine Tare, and Jenna Coleman will be on hand. Fans of the TV shows The Walking Dead; Arrow; Firefly; and Agents Of S.H.I.E.L.D. will also find some of their favorite stars there. I’m hoping to post more on this in the near future.

Jackson Browne and Greg Leisz are performing a Benefit For Veterans For Peace this Sunday night at the Copernicus Center in Chicago’s Jefferson Park neighborhood.

California residents will have an opportunity to hear two famous and very funny British men conversing now that tickets are on sale for the John Cleese with Eric Idle Live Talks Los Angeles show at The Alex Theatre. The Monty Python duo will be discussing Cleese’s book So, Anyway . . .

Monty Python fans in the Chicago area can see Neil Innes at Fest For Beatles Fans this weekend at the Hotel in Rosemont. Innes is a musician/comedian who worked quite bit with the Pythons, and was a driving force behind the Beatles parody act The Rutles.

The 23rd Annual Black Harvest Film Festival continues at the Gene Siskel Center in downtown Chicago and runs through the end of the month.

Also, next Saturday, Chicago venue The Elbo Room is sponsoring the ninth annual I Am Fest – International Art and Music Festival. The day-long event will actually be held at the more spacious The House Of Blues and feature music acts, art, and photography. The Smoking Popes, Sin Anestesia, and Littlebirds are scheduled to perform.

Tributosaurus will performing Tom Petty songs at the Taste Of Polonia Festival in Jefferson Park on September. The critically acclaimed tribute act, which use a rotating lineup of musicians, has honored Petty in the past.

Jefferson Park will also be the home of the Chicago Fringe Fest, which takes place in various venues around the northwest side neighborhood on two weekends, starting August 30. There’s a Preview Party on August 30 at the Copernicus Center.

We’ve recently had Stephen Stills and Graham Nash doing separate shows in Chicago, and now David Crosby is on his way. His David Crosby and Friends concert comes to City Winery Chicago on 10 - 30. Other upcoming shows at City Winery include Rusty Young with Poco on 10-25; The Alarm on 8-28, and Living Colour on 9-3.
Posted by Terry Flamm at 2:55 PM