A TARDIS Full Of Guests 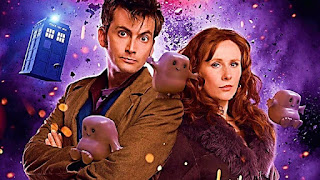 When I posted a preview of Wizard World last year, I noted celebrity guests were being assembled in teams from TV shows like The X-Files; The Walking Dead; Daredevil; and Arrow, and I wished there were a grouping of Doctor Who stars. This year, that dream comes true with David Tennant, Alex Kingston, John Barrowman, Catherine Tate, and Jenna Coleman among the amazing assortment of celebrity guests. As always, several other TV shows and movies will be represented.

Wizard World Comic Con Chicago also offers aisle after aisle of corporate and independent vendors selling comic books, t shirts, action figures, and other fantasy/sci-fi related artifacts. In the huge marketplace dubbed Artists Alley, up-and-coming artists and writers compete for attention. If I was a high-powered financier from a counter-culture version of Shark Tank, I’d put up funds for several of the worthy projects these people have created.

There’s also a fun, masquerade atmosphere as people dress up in superhero or villain costumes, and gladly pose for photos. Where else are you going to see Batman and Princess Leia sipping 32-oz. Cokes together, or Captain Jack Sparrow and Harry Potter walking side by side. Check the Wizard World Chicago Comic Con website for the complete list of guests, schedule, and prices.
Posted by Terry Flamm at 9:54 PM