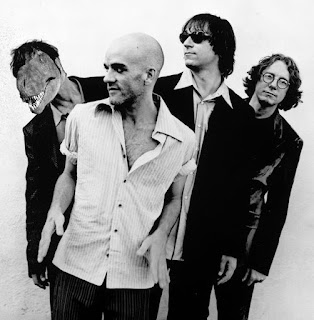 Photo from the Tributosaurus Facebook page.
Wizard World Chicago Comic Con announced today via a sensitively worded e-mail that David Tennant from the Doctor Who and Jessica Jones TV shows has cancelled his appearances at this year’s event due to an illness in his immediate family. While it’s a major disappointment, the important thing is to wish for a full recovery of the person who is ill. “We trust all will be well in London,” the Wizard World message states, “and will be sending our thoughts and prayers to David and his family.” All customers who paid to have an autograph and/or photo session with Tennant will be issued refunds.

The Backlot Bash kicked off in Skokie tonight with A Flock Of Seagulls, The Alarm, and Devil In A Woodpile. Soul Asylum and Frisbie are among the acts performing tomorrow, and on Sunday at 6:30 p.m., Tributosaurus becomes R.E.M. Admission is free.

Also in Skokie, the Bill Graham Rock And Roll Revolution continues its run at the Illinois Holocaust Museum And Education Center at 9603 Woods Drive. Graham was an iconic music promoter who brought big names bands to the Fillmore concert venue in San Francisco, and later to the Fillmore East in New York. He is credited with helping the careers of Janis Joplin, The Grateful Dead, The Who, and Jimi Hendrix. The exhibition runs through Nov. 12.

Acclaimed alt rock/Americana band Over The Rhine performs at SPACE in Evanston tomorrow and Sunday.

I always feel a rush of anticipation whenever I find a package from Fruits de Mer in my mailbox. The British indie label offers vinyl-only releases of current purveyors of prog, garage, and Euro rock and sends out promo CDs of its latest releases. The ones I just received—a five-song EP from the Spanish band Stay and a three-song single from UK veterans The Chemistry Set— are particularly good and I’m hoping to review them in the future.

Tickets are now on sale today for The Buzzcocks gig at Cobra Lounge in Chicago on September 16. Other new shows on sale include Peter Case at FitzGerald’s on October 21; Lemon Twigs at Thalia Hall on October 26; Los Lobos at City Winery on December 10–13; and Orwells at House Of Blues on September 14.

According to Tracy Swartz in a recent CHICAGO INC. column in the Chicago Tribune, the popular Fox series Empire plans to shoot a Prince-themed episode in Chicago for its fourth season.

An article by Robert Holly in this past Wednesday’s Blue Sky page in the Chicago Tribune’s Business section noted that the Reverb online marketplace for musicians is considering selling records and other music formats.

When the Polonia Festival in Jefferson Park takes place over the Labor Day weekend, one of the highlights will surely be the Tributosaurus becomes Tom Petty show on September 1. Other bands will be going the tribute route at the Polonia Festival, including Heartless as Heart; Reely Dan as Steely Dan; American English as The Beatles; Beggars Banquest as The Rolling Stones; and CTA as Chicago.

Congratulations to Streetwise as it celebrates its 25th Anniversary. I was at the first public meeting for Streetwise back 1992 when the idea of creating a publication that homeless people could sell to help support themselves was still in early development. I wrote entertainment features for Streetwise during its first few years, and I’m glad to see the publication still actively covers the performing arts scene in Chicago. Pick up a copy of the latest issue for $2 from one of the vendors in the downtown area.

I second that emotion. It was nice to see the support and affection popular weatherman Tom Skilling received after becoming overwhelmed as he reported on the recent eclipse for WGN TV. Reportedly, his tears were a response to witnessing the deep effect the solar event was having on those who had come out to view it.

In a perfect world, I would have spent the bulk of last weekend basking in the communal and creative vibes of the inaugural YippieFest at the Prop Thtr. As it was, a hectic schedule, a freelance overload, and a nasty cold limited me to a Saturday night visit to this three-day festival dedicated to carrying on the spirit of the Abbie Hoffman Died For Our Sins festival that was staged by the Mary-Arrchie Theatre for several years. From what I heard, former Mary-Arrchie Theatre Artistic Director (the troupe called it quits in 2016) dropped by on Friday night to show his support. On Saturday, Famous In Future performed a mix of old and new comedy material to packed and appreciative house, followed by an engaging new work from Black Forest Theatre that opened with a tribute to the late Sam Shepard. Here’s hoping YippieFest becomes a new summer tradition.
Posted by Terry Flamm at 10:48 PM