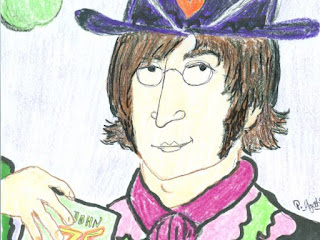 An Evening Of John Lennon is coming to City Winery Chicago tomorrow night, August 6, featuring Phil Angotti, Tommi Zender, Casey McDonough, Joe Camarillo, and Dick Schmidt. These guys are veterans of the local music scene and have successfully staged this retrospective before. Tickets are $15; the music starts at 7:30 p.m.

The 23rd Annual Black Harvest Film Festival opened today at the Gene Siskel Center in downtown Chicago and runs through the end of the month.

The Chicago Art Book Fair, an international showcase of “zine-makers, book artists, comic makers, photo book creators RISOgraph printers, and self-publishers,” makes its debut November 16 through 19 at the Chicago Athletic Association Hotel at 12 S. Michigan Avenue. It will be free and open to the public.

That new video Derrick Anderson talked about filming a while back for his impossibly catchy song “When I Was Your Man” is now available. Taken from his recent solo album A World Of My Own, the stark but fun clip features him on bass, along with Debbi and Vicki Peterson of The Bangles, and Kim Shattuck from The Muffs. Anderson has been performing with The Bangles as their bass player for some time now, and he got them, along Shattuck, Matthew Sweet, The Smithereens, and other power pop stars to help out on the album. As I said here before, I’d love to see Anderson go on tour with that all-star band, and come to Chicago.

In other Bangles news, the band’s 1984 album All Over The Place, was named as one of National Public Radio’s The 150 Greatest Albums Made By Women. Join Mitchell’s Blue came in at Number One. Vicki Peterson has formed a new band called Action Skulls with John Cowsill and Bill Mumy. “Mainstream,” a satiric and jangling tune from their upcoming album Angels Hear, can be heard on The Bangles Facebook page.

The always essential website The Second Disc recently reported on Leave Home: 40th Anniversary Deluxe Edition of The Ramones’ second album. Writer Joe Marchese stated that the three-CD/one-LP box set comes with a remastered version of the album, a new mix on CD and vinyl, and a bonus disc with 33 rare tracks. In another Second Disc post, Marchese covered The Who’s upcoming Maximum As and Bs: The Complete Singles five-CD box set. It comes with a 48-page booklet.

Chicago venue The Elbo Room is sponsoring the ninth annual I Am Fest – International Art and Music Festival on August 19. The day-long event will actually be held at the more spacious The House Of Blues and feature music acts, art, and photography. The Smoking Popes, Sin Anestesia, and Littlebirds are scheduled to perform.