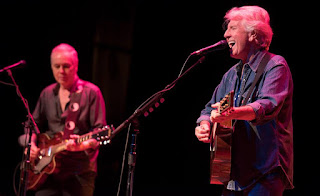 Graham Nash’s latest tour features him once again sharing the stage with guitarist-vocalist Shane Fontayne. It’s at least his third time around with Fontayne, who also toured with Sting and Bruce Springsteen. The duo has evolved nicely into another successful musical relationship for Nash, following those he’s forged with David Crosby, Stephen Stills, and Neil Young, as well as with Allan Clarke and Tony Hicks of The Hollies.

During Nash’s July 29 concert at The Old Town School Of Folk Music in Chicago (the second of his three sold-out shows there), he and Fontayne demonstrated how they practice harmonizing by delivering a breath-taking version of Paul McCartney’s “Blackbird.” Their compatibility extended to the way Fontayne’s electric guitar playing provided a powerful undercurrent to Nash’s melodic acoustic strumming on “Wasted On The Way,” “Immigration Man,” “Wind On The Water,” and “Marrakesh Express.” “I Used To Be A King,” which Nash described as “My first breakup song,” concluded with some spirited jamming.

Nash continued his recent tradition of opening shows with a pair of Hollies songs—this time playing “On A Carousel” and “Carrie Anne.” It would great to see him delve deeper into his tenure with the British Invasion band for songs like “Butterfly” or “Tell Me To My Face.” He and Fontayne added another stellar Beatles cover with “A Day In The Life” from Sgt. Pepper’s Lonely Hearts Club Band. The bulk of the concert was devoted to Nash’s solo output and his work with Crosby, Stills, and Young. “Golden Days” and “Found Myself At Last” from his 2016 solo effort This Path Tonight were introspective and engaging. “Mississippi Burning,” a bonus track on Path, was a hard-hitting tribute to murdered civil rights workers.

Nash’s occasional political comments during the Old Town show were measured but forceful, and he altered a line in “Military Madness” to “I hope Trump discovers what’s driving the people wild.” “Chicago,” performed as the final encore, remains as relevant today as when it sprung from his Songs For Beginners solo debut in 1971. Like the early Crosby, Stills Nash and Young hits “Teach Your Children” and “Our House,” it had people joyously singing along with Nash and Fontayne.
Posted by Terry Flamm at 9:34 PM