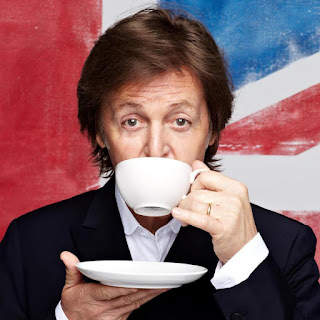 On any given night of Paul McCartney’s current tour, a number of audience members are fulfilling a long-time (almost lifelong) desire to see Beatles songs performed by an actual Beatle. Scanning the crowd at the Hollywood Casino Amphitheatre in Tinley Park this past July 25, it was easy to spot girls-night-out friends hugging and laughing in disbelief that they were about to see Paul McCartney in person. A pair of guys behind where my wife Pam and I were sitting swapped predictions of which songs McCartney had to play, and there were plenty of parents who brought young kids with them.

McCartney and (from what I’ve read) Ringo Starr approach this mammoth responsibility with a bemused expression and an old-fashioned work ethic. McCartney played three hours of classic material augmented by dazzling technical effects, but consistently addressed the crowd as though he was chatting with some mates at the corner pub. His tales centered on encounters with other famous musicians, as well as the simple events that sometimes provide inspiration for a song.

“We’re going to take you back in time,” he announced before harmonizing perfectly with members of his first-rate backup band on the pre-Beatles Quarrymen song “In Spite Of All The Danger.” The concert also included the engaging “Queenie Eye” and “New” from his most recent release, New. McCartney’s days with Wings were well represented with rousing versions of “Nineteen Hundred And Eighty Five,” “Letting Go,” and “Band On The Run.” An extended jam at the end of “Let Me Roll It” honored Jimi Hendrix and led to a funny anecdote about the iconic musician playing to a star-studded audience that included McCartney and Eric Clapton. After realizing his guitar was out of tune, Hendrix reportedly spotted Clapton and asked if he’d come on stage to tune it for him. According to McCartney, Clapton refused.

While introducing the rollicking “I Wanna Be Your Man,” McCartney related how he and John Lennon decided to give the song to The Rolling Stones so they could have a hit single with it. “Here Today,” served as a knowing and heartfelt tribute to Lennon, and later in the show, McCartney quietly strummed “Something” on a ukulele before the full band joined in and photos of George Harrison spread across the big screens surrounding the stage. McCartney also took a moment to honor producer George Martin, suggesting there wouldn’t have been a Beatles without his guidance.

Throughout the show, he seamlessly blended highlights from his solo career—“Maybe I’m Amazed,” “Temporary Secretary,” an eye-popping “Live And Let Die”—with Beatles classics. “Blackbird,” which he explained was inspired by the civil rights movement in America, “And I Love Her,” “Fool On The Hill,” and “Let It Be” were pure magic, while “Back In The U.S.S.R.,” “Can’t Buy Me Love,” and “Lady Madonna” were performed at full power by McCartney and his band. He dedicated “Birthday” to everyone in the crowd who was celebrating their birthday that night (which included me), and in honor of the 50th anniversary of Sgt. Pepper, played “Sgt. Pepper’s Lonely Hearts Club Band (Reprise)” and “Being For The Benefit Of Mr. Kite!”

As “Hey Jude” sparked its customary audience sing-along on the “Na na na na na na na” coda, it was amazing to glance around the stadium, as well as back across the lawn area, and see so many exuberant people joining together.
Posted by Terry Flamm at 9:37 PM