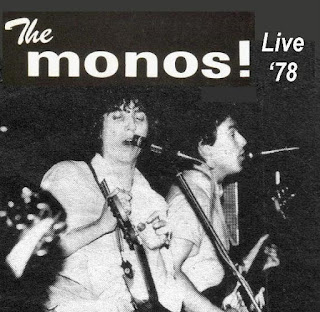 Live ‘’78 is a low-fi trip back to the dawn of the punk and power pop genres. Available from the Kool Kat Musik label, it features the UK band The Monos! performing at the North East London Polytechnic club a few weeks before The Pretenders made their debut there. The Monos! released a few singles but broke up before they could record an entire album. This show was captured on a cassette recorder, but it’s worth enduring the primitive sound quality to experience catchy and hard-edged songs that otherwise would have been lost to obscurity. Note: there is currently an English band called The Monos that is unrelated to the late 1970s version.

The driving beat and biting observations of “New York Girls” is reminiscent of Joe Jackson while “Pop Heart” and “Melt Away” have a classic power feel. “Ericafire,” introduced by the band as “a bit of reggae song,” is the only number that feels less than genuine. The Monos! masterfully blend social satire with great hooks on “Cathy’s Got A Girlfriend” and “Guitar Hero,” while “Shot Dead,” apparently a tale of a woman’s unsuccessful attempt to get past the Berlin Wall, has a more punk style intensity.

“Difficult World” deals with navigating the perils of everyday life, and is described by the band as, “the one NME [New Musical Express] would like if they ever came to see us.” The musicians’ between-songs banter adds to the live club ambience and makes Live ’78 even more fun. Still, it would be great if someone could unearth those early singles so we could hear how The Monos! sounded in the studio.
Posted by Terry Flamm at 2:46 PM