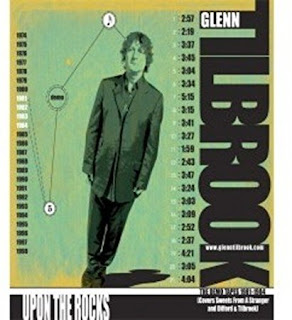 Musician/artist Graham Elvis will be showcasing his latest artwork today at the Pearls, Paintings And Prosecco Open House at Bourdage Pearls on Ravenswood Avenue.

The Second Disc website recently had a post about Upon The Rocks, the fifth and final entry in Glenn Tilbrook’s series of Squeeze-related demos albums. This one concentrates on the band’s 1982 release Sweets From A Stranger, as well as the 1984 Difford And Tilbrook side project.

The Second Disc also had news this week about the Blu-ray and DVD versions of Ron Howard’s Beatles documentary Eight Days A Week; a super deluxe, 5-CD box set of The Who’s My Generation album; and the various formats for R.E.M.’s 25th Anniversary Edition of Out Of Time.

The Safes, a band that has adroitly mixed hard-edged melodies and harmony vocals with punk exuberance on a series of releases, will hold their annual pre-Thanksgiving bash Friendsgiving on Wednesday at Chop Shop on North Avenue. They’ll be joined by critically acclaimed siblings White Mystery. Flesh Panthers, who switched from their usual punk rock to a more atmospheric approach on their new Willows Weep album, will also be on the bill. Comedian Bill Bullock opens the show. The Safes will be performing live earlier that day on Fox Morning News.

More pre- and post-Thanksgiving treats: Phil Angotti And Friends will be performing the entire Paul McCartney album Ram on Wednesday at Reggie’s Chicago on State Street. Mr. Blotto is also on the bill that night. You can wrap up your Black Friday shopping and then drop by FitzGerald’s in Berwyn to proclaim, “Not Dead Yet!” while The Bad Examples are performing that night.

Walk Like A Humanitarian. The Bangles headlined the multi-act Music On A Mission benefit this past Thursday at the Casa Escobar venue in Malibu, CA. The event helped raise funds for Mending Kids, which brings life-saving surgical care to children around the world.

Dream Version has just created a fun, Devo-style video for “Romance,” a track from its 2015 album Beginners. The catchy melody evokes Buddy Holly and the Chicago-based band adds energetic guitar strumming and harmony vocals. Dream Version and the indie rock/power pop trio Bloom will be performing at the Protect Our Winters event being sponsored by New Belgium Brewing and Ben and Jerry’s on Wednesday, November 30 at Lincoln Hall. POW, a group working to raise awareness of the dangers of global warming, will have representatives on hand to explain their mission. There is a suggested $5.00 donation.

Also coming up at Lincoln Hall, Chicago music scene veterans The Hemmingbirds will be doing a farewell show on December 29. They’ll be joined by Mutts, Archie Powell And The Exports, and Jesse W. Johnson.

The Jigsaw Seen will be playing songs from their cold weather concept albums Winterland and Gifted at the Divebar in Las Vegas on December 9th. The band also has four California gigs coming up next month: Silverlake Lounge in Los Angeles on the 10th, Continental Room in Fullerton on the 12th, Whistle Stop in San Diego on the 15th, and Hotel Utah in San Francisco on the 17th.

Tickets go on sale this Monday for Sting’s March 3 show at the Aragon Ballroom.

A boomerang dream. Australian power pop outfit The Jangle Band has just released an extended version of the Edge Of A Dream album I reviewed favorably here on May 25 of this year. This one has five earlier bonus demo mixes that feature the writer of each as lead vocalist. Some are quite different from the versions used on the album. I’m hoping to post more about this in the near future.

The Chicago Pop Culture Show And Sale takes place next Friday and Saturday, November 25 and 26, at the Pheasant Run Mega Center in St. Charles. There will lots of comics, toys, games, and memorabilia for holiday gift shopping, as well as special guests and cosplay. The event will also serve as a publishers and artists convention.

Wilco will bring its Winterlude 2017 concert series to The Chicago Theatre on February 22, 23, and 25. Tickets went on sale this past Friday.

Maybe he’ll be autographing coconuts. John Cleese will on hand when The Chicago Theatre offers a special screening of Monty Python And The Holy Grail on January 22. Tickets are going quickly.
Posted by Terry Flamm at 1:49 PM