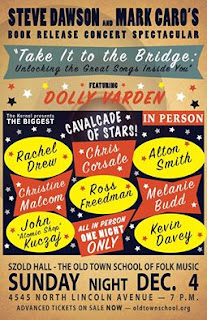 Musician Steve Dawson and journalist (Chicago Tribune and Chicago Sun-Times) Mark Caro plan to launch their Take It To The Bridge book in a big way at The Old Town School of Folk Music this Sunday night at 7:00 p.m. Subtitled Unlocking the Great Songs Inside You, this collaboration is aimed at explaining the art of songwriting in an informative and entertaining fashion. Dolly Varden, the critically acclaimed alt-rock/Americana band Dawson leads with his wife Diane Christiansen, will be performing, along with Rachel Drew, Chris Corsale, Alton Smith, Christine Malcom, Ross Freedman, Melanie Budd, John Kuczaj, and Kevin Davey. Tickets are already available.

Best wishes to Laura Good for a full recovery after her recent brain surgery. Laura and her sister Linda have performed together and as solo acts over the years, and recently reunited as The Twigs on some recording projects.

Judging from photos I’m seeing posted on Facebook, Bruce Springsteen met his share of Midwestern musicians while signing copies of his new Born To Run bio at Books A Million in downtown Chicago today. Congrats to Christopher David from Magatha Trysty, Mike Vanderbilt from The Romeros, and Terry Hackbarth from Trolley on being able to pose with The Boss.