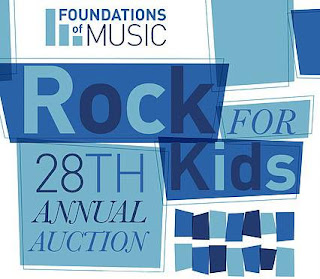 Strange things happen when two cities that haven’t won a baseball championship in decades meet in the World Series. Rather than the usual hometown foods most mayors put on the line, Chicago’s Rahm Emanuel and Cleveland’s Frank G. Jackson went big time with their bets. And now that the Cubs have defeated the Indians, Jackson has to turn his city’s cultural crown jewel—The Rock And Roll Hall Of Fame—over to Chicago. If Emanuel had lost the bet, he would have had to find some way to ship Millennium Park off to Cleveland. Nothing has been planned just yet, but look for all those rock-related treasures and rarities to be on display in their new Windy City setting sometime in 2017.

Okay, none of the above is true. But rock and roll fans in Chicago will have a chance to not only view, but actually own some cool memorabilia when the Foundation Of Music’s 28th Annual Rock For Kids Auction takes place tomorrow night at Park West. Attendees will have an opportunity to bid on rare items donated by musicians, sports figures, and other celebrities. WXRT morning drive air personality and Cubs fanatic Lin Brehmer will once again serve as emcee, and former XRT Program Director Norm Winer will receive the Foundation Of Music’s Crystal Brick In The Wall award from MTV VJ Alan Hunter. Tickets for Rock For Kids benefit can be purchased from Park West.
Posted by Terry Flamm at 10:42 PM