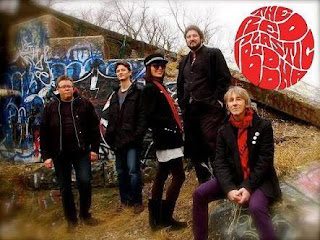 One of Chicago’s best psychedelic bands, The Red Plastic Buddha, will be bending minds at The Red Line Tap tomorrow. Dark Fog and Led Pig are also on the bill; the music starts at 9:00 p.m.

The scariest thing going on around Chicago last Halloween weekend was the Cubs losing games three and four to the Cleveland Indians in the World Series. Meanwhile, entertainment venues probably had far less business than usual for the holiday, and a pall fell across the parties being held in people’s homes. All is forgiven now, as the Cubs went on to win the next three games and earn their first championship since 1608. Okay, 1908. To understand why this is so momentous, consider how many Cubs fans had not only gone their entire lives without seeing their team in a World Series, but had also watched what seemed like cruel twists of fate destroy Cubs teams during playoff games in previous years. Congratulations, Chicago Cubs. We can’t thank you enough.

Foundation Of Music’s 28th Annual Rock For Kids Auction takes place tonight at Park West in Chicago. WXRT morning drive air personality Lin Brehmer will once again serve as emcee, and former XRT Program Director Norm Winer will receive the Foundation Of Music’s Crystal Brick In The Wall award from MTV VJ Alan Hunter. Attendees will also have an opportunity to bid on rare items donated by musicians, sports figures, and other celebrities.

As noted by Adam Lukach in his Chicago Tribune column DO IT NOW, Pet Shop Boys will be performing at the Civic Opera House tomorrow night. Lukach also noted that Pet Shop Boys dropped a new album earlier this year.

HoZac10, a celebration of the Chicago-based HoZac Record label’s ten years of offering cutting-edge indie rock, takes place tomorrow night at The Double Door on Milwaukee Avenue. Ten bands, along with a pair of DJs, will be performing on two stages, starting at 8:00 p.m. WXRT air personality Richard Milne offered a fascinating preview of this event on his Local Anesthetic radio program. In addition to The Gories, Heavy Times, Mike’s Rep, The Sueves, The Yolks, DJs Erin and Jessie, Julian Leal Band, COZY, The Jeanies, 1-800-Band, and beastii, there may be special guests.

Congratulations to Bono of U2 on being chosen as one of Glamour magazine’s Women Of The Year. An Associated Press piece quotes the publication’s editor Cindi Leive’s reasoning as, “There are so many men who really are doing wonderful things for women these days. Some men get it, and Bono is one of those guys.” No joke here. I just thinks that’s really cool.

Van Go and Red Wigglers will be sharing the bill tomorrow night at Gallery Cabaret on Oakley Avenue in Chicago.

Tom Lounges Entertainment, LLC is presenting Rockin’ For Critters, an evening of 1950s and '60s music tomorrow night at the Memorial Opera House to help homeless animals in northwest Indiana. Lounges, a longtime Chicago area journalist, publisher, and radio personality, with co-host the event with 1960s TV and film actress Charlie Smith. The Meet The Beetles tribute band and 1950s singing group The Spaniels Forever will perform, and there will be a silent auction. Tickets are $15 and $18, with a $2 service fee for each ticket. The Memorial Opera House is located at 104 E. Indiana Avenue in Valparaiso, IN. The doors open at 5:00 p.m.

Former R.E.M. bassist-vocalist Mike Mills will be performing his own “Concerto for Violin, Rock Band and String Orchestra” with violinist Robert McDuffie at the Harris Theatre in Millennium Park this Monday night.

Tickets went on sale today for the 93XRT Goose Island Big Holiday Concert with Nathaniel Rateliff and The Night Sweats at Chicago Theatre on December 7.

Also on sale today: Del Fuegos member Dan Zanes at City Winery on December 11; Regina Spektor at Chicago Theatre on March 24; and The Zombies at Thalia Hall on April 13.

Vulgar Boatmen will be at Schubas on January 7. I’m way behind in covering albums, but I will be posting a review of the Vulgar Boatmen’s Remastered 25th Anniversary of their You And Your Sister album in the near future. The release includes three bonus tracks.

The Blue Whiskey Independent Film Festival will be holding a fundraiser  at 7:00 p.m. tomorrow night at Smith Street Station (next to Durty Nellie’s) in Palatine. Blue Whiskey, which holds an ambitious international film festival each July in the northwest suburbs, promises the fundraiser will have drinks, appetizers, raffles, a photo booth, candy bar, and a photo booth. Admission is $20.

The Jigsaw Seen is enticing its most loyal fans with new compilation CD titled The Jigsaw Seen For The Discriminating Completist (Rarities And Singles 1989 – 2015). In addition to 12 tracks that have never been offered on one of the band’s albums before, the packaging includes a wallet-size photo in a resealable sleeve and a “Back To monocle” button.

The Smithereens will be performing a benefit for the Path Crisis Center at The Castle Theatre in Bloomington, IL on December 3, along with the band 7 West and comedian Marc Price. Price played Skippy on the Family Ties sitcom. You have to like the tagline for this event: They came from Jersey . . . And Now They’re Near Normal! (Illinois)

Finally, if you have Chicago friends on Facebook, check to see if they’re sharing any highlights from the World Series finale or the celebratory parade that was held downtown today. There are some amazing videos going around.
Posted by Terry Flamm at 10:57 PM