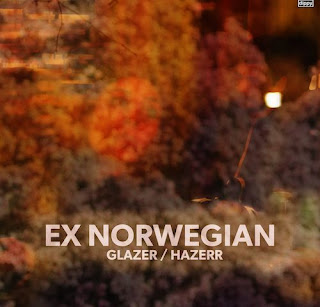 About a year ago, Ex Norwegian released Pure Gold, a masterpiece jumble of originals and cover versions that tapped into power pop, psychedelia, and indie rock. The Miami-based band’s latest effort Glazer/Hazerr isn’t quite as brilliant as its predecessor, but does succeed using a similarly eclectic blueprint. Singer-guitarist Roger Houdaille sets his unique observations to infectious melodies, and once again crafts some of rock’s most dynamic coed vocals with singer Michelle Grand.

“Father Goose” is a silly fable about birds flying without wings, and “Ice,” another one of Houdaille and Grand’s enticing duets, is a basic but effective garage rock love song. “Life,” which offers some timely advice about overcoming obstacles and disappointments, sports a harder-edged arrangement. “Pocket Dancing” sounds like a show tune, while “Aruba Moon” has a slow, majestic feel reminiscent of 1970s classic rock.

“Modern Art Brigade” delivers social satire in a very Kinks “Dedicated Follower Of Fashion” way and is backed by a fun, loping rhythm section. “Quite Contrary” follows a similar path but is more overtly psychedelic. There seems to be a definite Rubber Soul era Beatles influence on “Reverse,” a tale of unrequited love, particularly on the psychedelic guitar playing. On “Song Of Many,” Ex Norwegian creates a pure power gem, using a mix of acoustic and electric guitars, intertwined vocals, and an engaging melody.
Posted by Terry Flamm at 10:22 PM

They're really fun to listen to. i said it before, I'll say it again, prolific with their melodies and through all the lineup changes, one thing is consistent - the quality of the music.

Thanks, Jay. I totally agree.