I’ve Got A Feeling 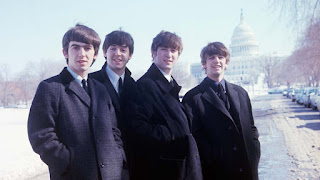 Ron Howard’s documentary The Beatles - Eight Days A Week - The Touring Years is being screened each night at The Gene Siskel Film Center in downtown Chicago through Thursday, November 10, and it’s also being shown at The Tivoli Theatre in Downers Grove. Packed with rare, vintage footage, it follows John, Paul, George, and Ringo through their early days of performing. The concerts, recording sessions, press conferences, backstage maneuvering, and hotel room banter vividly recapture what it must have felt like to be on one of the greatest thrill rides in recent history.

Paul McCartney and Ringo Starr offer touching and informative commentary in recently filmed bits, while older clips of John Lennon and George Harrison provide their reflections on Beatlemania. Reporter Larry Kane, who reported on The Beatles while traveling on tour with them, adds a unique perspective, and Howard also taps Whoopi Goldberg, Elvis Costello, and others to share their memories. Eight Days A Week touches on the John F. Kennedy assassination, the civil rights movement, and the Vietnam War, while showing how The Beatles were affected by society, as well as how they changed it.

Gradually, The Beatles grew less astonished by their worldwide popularity, and felt more imprisoned within it. By they time they performed at San Francisco’s Candlestick Park in 1966, all four of them wanted to skip the screaming audiences and concentrate on exploring new musical territory in the studio. At the Gene Siskel Film Center, Eight Days A Week is also being shown with the 30-minute documentary The Beatles Live At Shea Stadium. Seeing Howard’s documentary helps bring a deeper understanding of The Beatles’s 1965 show in New York. While their songs burst with guitar-driven energy and harmony vocals on this vividly restored footage, it’s now easier to connect to the very human emotions behind the superstars personas.
Posted by Terry Flamm at 10:24 PM