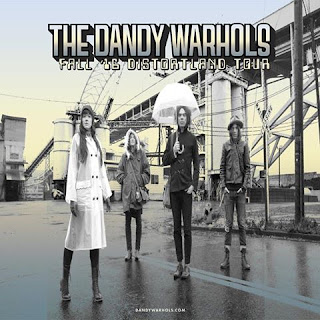 The Dandy Warhols are coming to Park West on September 24.

Here’s an official Broken Hearted Toy welcome to all of those who have come to Chicago for the Pitchfork Music Festival this weekend in Union Park. It kicked off today at 3:00 p.m. and runs until 10:00 p.m. on Sunday. This week’s edition of The Reader has a rundown on all the acts that will be performing, and carries on the publication’s tradition of having a cool Pitchfork illustrated front cover. Posters of Pitchfork covers from previous years are available from The Reader. Also check out knowledgeable rock critic Greg Kot’s cheatsheet in today’s Chicago Tribune.

The annual Southport Art Festival is being held tomorrow and Sunday at Southport and Waveland. Admission is free, and a full page ad in the Redeye newspaper promises live music, but I wasn’t able to find any details on the web. If past Southport fests are any indication, there will be a lineup of about five local acts each day.

Tickets went on sale today for upcoming shows by Matthew Sweet (September 9) and The Dandy Warhols (September 24) at Park West.

Piano accompanist David Drazin will be providing a live soundtrack to Fritz Lang’s highly influential and critically acclaimed silent film Destiny tomorrow (July 16) at 3:00 p.m. at the Gene Siskel Film Center. I first met Drazin back in the late 1980s when we founded the Famous In The Future comedy group with Frank Carr and Lake Sirmon.

Minds will be bending to the beat next Saturday, July 23 at the Burlington Bar on Fullerton in Chicago when Psychedelic Saturday takes place. The Red Plastic Buddha, the Chicago-based band whose Songs For Mara album came in at number four on the 2014 Broken Toy Favorite Releases List, will be performing. The other acts on the bill are Dark Fog; Warhorses, coming in from Detroit; and Diagonal, performing its first show. DJ Psyched Alex will keep the music flowing between sets. The event starts at 8:30 p.m.

Self-published author Susan Kaye Quinn will share secrets on how she’s successfully marketed over 50 sci-fi books next Wednesday, July 20 at the Barnes and Noble store in Schaumburg. Quinn is a member of the SCBWI (Society of Children’s Book Writers and Illustrators) group I’ve belonged to for a number of years. Her workshop is titled Series and Serials – Writing Stories That Keep Your Readers Coming Back For More.

Freema Agyeman. who played the cool and courageous Martha Jones to David Tennant’s emotionally complicated Doctor on Doctor Who, was in Chicago recently filming scenes for the second season of the Netflix sci-fi show Sense8.

The Artist Formally Known As Vince (lots of people get the name wrong and say ‘Formerly’) will be performing next Wednesday at Martyrs’ on Lincoln Avenue. TAFKAV is a fun co-ed indie band that has performed a number of times at International Pop Overthrow - Chicago.

New City came out with its annual Music 45 - Who Keeps Chicago In Tune issue, with blues legend and Rolling Stones pal Buddy Guy coming in at number one. There’s a good variety in the choices, which include Chicago Symphony Orchestra music director Richard Muti; musician/producer Jeff Tweedy of Wilco; hip-hop pioneer/actor Common; jam band Umphrey’s McGee, and Smashing Pumpkins. This issue also has a preview of Lollapalooza (July 28–31), along with three full-color pages of Lollapalooza posters. New City is available for free in newspaper boxes and venues around downtown and on the north side.