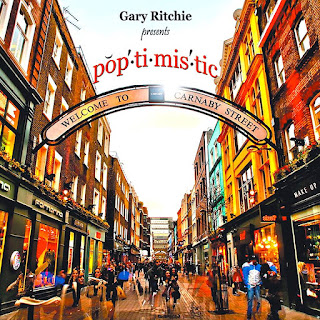 Chicago-based multi-instrumentalist and singer Gary Ritchie’s career in power pop includes his time with one of the genre’s earliest bands Loose Lips. He’s also performed with Mike Jordan and The Rockmatics. As on his earlier solo efforts, Ritchie fills pop-ti-mis-tic with catchy 1960s style arrangements fueled by ringing guitars. His voice can still come across as a little hokey at times, but the lyrics feature clever imagery and wordplay.

On the funny and very Beatlesque “Million Dollars,” Ritchie dreams of various achievements—like playing shortstop for the Cubs in a World Series—that would make him more appealing to a woman who has just given him the cold shoulder. “Let’s Pretend” and “Book Of Answers” are catchy pop songs about unrequited love while on “It’s Not Automatic,” it’s the guy who’s bailing on the relationship. “Friend Of Old” has a more somber approach, as Ritchie pays tribute to bass player Tom “Pickles” Piekarski, who was probably best known for his work with The Bad Examples, and widely respected on the local music scene.

Ritchie taps into Buddy Holly on “Carol Says” while “Perfect Girl,” about a lifetime infatuation with model in a magazine, evokes an early 1960s sock hop. “Subtle As A Freight Train” shows Ritchie at his best, as he tosses nostalgia aside and goes for a harder edged power pop arrangement.
Posted by Terry Flamm at 10:09 PM