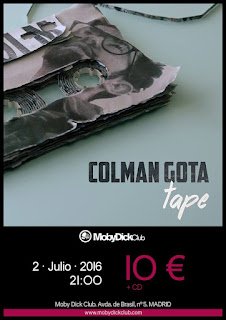 Vocalist-bassist Colman Gota from the Madrid-based power pop band Insanity Wave creates edgy pop tunes reminiscent of Elvis Costello and Graham Parker on his second solo effort Tape. The 11 tracks were recorded with Mitch Easter of Let’s Active fame and multi-instrumentalist John Pfiffner at the same Fidelitorium Studios in North Carolina where Easter produced Insanity Wave’s third album back in 2000. Gota exudes an independent spirit and an urge to make the most of life throughout Tape, while delivering songs with an emphasis on guitar and organ that underscore his fascination for vintage indie rock.

“Time keeps on ticking down and all you’ve done is run around,” Gota sings on “Another Chance,” while on “Do What I Want,” a tale of breaking free from a mundane nine-to-five job, he asks, “Whatever happened to the rebel inside?” The energetic “Waiting For A Chance” and the Motown flavored “Something I Don’t Need” likewise put biting lyrics to a steady beat. As a change of pace, “A Long Week Ahead” is a touching show of support set to a strings and acoustic guitar arrangement.

“Back In Time,” a catchy song about traveling into the past to prevent mistakes that scuttled a relationship, could have sprung from one of Tom Petty’s early albums. “Sing Your Song” is an inside look at the music business, while “Tape” honors the cassettes that first introduced Gota to the music he’s loved ever since. “Plenty of good stuff on both sides,” he sings, and the song’s swaggering classic rock arrangement emphasizes the point.
Posted by Terry Flamm at 10:47 PM