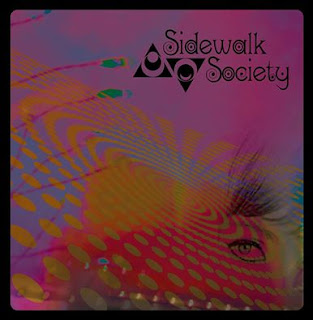 Sidewalk Society was one of the acts recruited by the UK indie label Fruits de Mer for its limited-edition Fashion – Songs Written By David Bowie album earlier this year. The California-based trio’s cover of “Can’t Help Thinking About Me” will also soon be available on its own self-titled, colored-vinyl EP, due out on FdM in early August. The other three tracks are also covers—Bowie’s “Let Me Sleep Beside You” and a pair of songs originally done by the less-famous but still tribute-worthy English band The Action. Sidewalk Society has covered The Rolling Stones and The Kinks in the past, and they’re at the top of their Brit Invasion game again on this effort.

David Bowie is often thought of as having emerged in the 1970s, but his “Can’t Help Thinking About Me” single was released in 1966. Sidewalk Society’s version calls to mind the earliest work of The Who, thanks to Jerry Buszek’s propulsive drumming. At the same time, the vocals (I’m not sure whose since Buszek, guitarist Danny Lawrence, and bassist Dan West are all listed as singers) capture Bowie’s charismatic approach. The seductive intentions of “Let Me Sleep Beside You” are set to an exotic arrangement that includes a touch of soul as well as string accompaniment.

Lawrence explains on the FdM press release that Sidewalk Society used its “passion for great albums of that era” to reinvent a pair of demo versions by The Action. “Look At The View,” with flower power sentiments like, “Sun is shining, plenty of light,” is authentic psychedelia infused with power pop. “Strange Roads” finds Sidewalk Society successfully experimenting with a more hard-edged 1970s rock feel. The trio’s 2012 full-length effort Venus, Saturn and The Crescent Moon is available on its Bandcamp page.
Posted by Terry Flamm at 11:04 PM