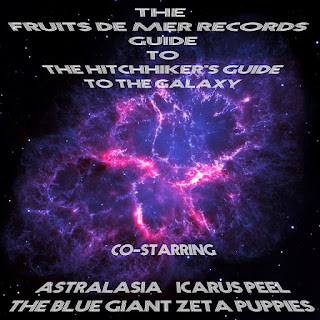 For anyone who feels Broken Hearted Toy has been over-saturated with Chicago events lately, here’s a post that’s light years away from my hometown. England’s eccentric and consistently adventurous indie label Fruits de Mer has just launched another batch of limited-edition seven-inch singles on colored vinyl. One of those records is a tribute to “Journey Of The Sorcerer,” the theme song from the 1970s UK sci-fi miniseries The Hitchhiker’s Guide To The Galaxy.

The hilarious book by Douglas Adams was also adapted for radio and film in the past, and now it’s inspiring psyche/prog rock musicians. The Fruits de Mer Records Guide To The Hitchhiker’s Guide To The Galaxy, AKA “Journey Of The Sorcerer,” features three different versions of the theme song by regulars from the FdM roster. Each of them comes through with flying—make that warp speed—colors.

The three instrumentals on this record are so completely different from each other that anyone not familiar with “Journey Of The Sorcerer” would likely not realize they’re all the same composition. Australasia's version is spacey and triumphant, and the one that most resembles the theme from another cult classic, Doctor Who. Guitarist Icarus Peel takes a more mysterious approach while delving into sultry modern jazz. Blue Giant Zeta Puppies, living up to their rambunctious name, provide some high-energy transportation to the end of the universe.

Fruits de Mer has always rewarded its customers, and in this case, anyone who orders “Journey Of The Sorcerer” will get a bonus CD with material by Quantum Surf Rocket Garage Dolls, Australasia, and Pete Bingham from the band Sendelica.
Posted by Terry Flamm at 9:56 PM