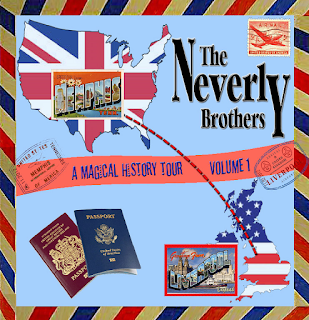 The Neverly Brothers have been bringing their unique showcase of 1950s and 1960s hits to Chicago area (and sometimes out-of-state) venues for some time now. Guitarist Kevin Giragosian, drummer Kegham Giragosian, and upright bass fiddle player Craig Gigstad deliver a good-time selection of songs, and since all three of them can sing lead, there’s an entertaining variety of vocal styles and harmonies. The band’s solid reputation on the local club and festival scene enables them to rival Beatles tribute acts like American English and BritBeat.

The Neverly Brothers have simultaneously released their Magical History Tour Volume 1 and Volume 2 CDs, which are available individually or as a set. Echoing the format of the live show, these discs feature The Neverly Brothers performing songs by rock and roll pioneers like Chuck Berry, The Everly Brothers, and Buddy Holly, along British Invasion stars like Manfred Mann, The Kinks and Peter and Gordon. Other songs were originally done by American rhythm and blues artists, and later reinvented by The Beatles, The Rolling Stones, and The Hollies. The CDs have a party atmosphere even if they don’t quite capture the fun of The Neverly Brothers performing live.

I’d like to see The Neverly Brothers embark on a side project—covering acts from the early 1980s rockabilly revival, like The Stray Cats, The Polecats, The Hillbillies, and The Elvis Brothers.
Posted by Terry Flamm at 9:45 PM