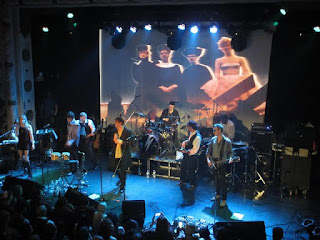 Photo from the Sons Of The Silent Age Facebook page.

Chicago Tribune rock critic Greg Kot’s extensive piece on tonight’s Sons Of The Silent Age David Bowie tribute show at Metro was informative and engaging; and the first I’ve heard that Sinead O’Connor will be involved. Former Bowie backup singer Ava Cherry will will also be on hand as Sons Of The Silent Age celebrate the 40th Anniversary of Bowie’s Station To Station by performing the entire album. Tickets are $21, and a portion of the proceeds will benefit Cancer Research at the University of Chicago Medical Center.

The Neverly Brothers will be bringing their very fun musical history show to Durty Nellie’s in Palatine tomorrow night, March 5. The 1950s/‘60s cover band’s double CD A Magical History Tour Volume 1 and Volume 2 is available for sale at its gigs.

Tony Award nominee Mary Bridget Davies will be in the lead role when A Night With Janis Joplin comes to The Chicago Theatre this Sunday, March 6. The show is being described as “a musical journey celebrating Janis Joplin and her biggest musical influences.”

This is the last weekend to catch the Mary-Arrchie in action. After its current run of David Mamet's American Buffalo ends on Sunday, the critically acclaimed storefront theatre will cease to exist.

This is also the last weekend to check out The Hypocrites theater group’s staging of local actor Hans Fleischman’s inventive and critically acclaimed take on The Glass Menagerie at The Den Theatre.
Posted by Terry Flamm at 8:10 PM