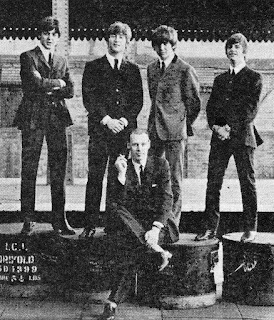 Even genius sometimes needs an introduction. When it comes to The Beatles, Brian Epstein and George Martin paved the way for the most most important rock band in history to connect with previously clueless record industry executives. And they changed the world forever. Epstein passed away in 1967. Martin left us a few days ago. As a producer, he worked with an amazing range of high-profile recording artists, but like Epstein, he’ll be remembered for his work with The Beatles. Thanks to both of these gentlemen for the gift of a lifetime.

The Experience Hendrix Tour comes to town tomorrow night for a show at the Chicago Theatre. The performers honoring the legendary guitarist include Buddy Guy, Jonny Lang, Kenny Wayne Shepherd, Ana Popovich, and Zakk Wylde. Tickets range from $38 to $98.

The Heroes And Villains Fan Fest takes place at the Donald E. Stephens Convention Center in Rosemont tomorrow and Sunday. At least eight cast members of the TV show Arrow will be on hand, including Stephen Amell, Katie Cassidy, David Ramsey, and Katrina Law. Other fantasy-related shows, like The Flash, Gotham, and Once Upon A Time, will also be represented.

The final four performances of the rock music-infused version of Twelfth Night, created in the UK by Filter Theatre in association with the Royal Shakespeare Company, will held at the Chicago Shakespeare on Navy Pier theater this weekend.

This week’s Sunday night concert on WXRT is a 2000 performance by U2. People living outside of Chicago can stream the concert on the station's website.

Not Dead Yet. As it turns out, last Sunday’s performance of American Buffalo was not the final offering from Mary-Arrchie. The storefront theatre decided to call it quits after learning its home of 30 years was scheduled to be demolished, but in a recent email with the subject line, “Hold Off The Wrecking Ball,” Mary-Arrchie announced that American Buffalo has been extended through April 17. There will be some casting changes, but the bottom line is that you still have more a few more chances to catch a show by this iconic Chicago theatre company.

C2E2 (Chicago Comics and Entertainment Expo) runs from next Thursday, March 18 through 20 in the South Building at McCormick Place on Lake Shore Drive. Actor John Cusack, best known for his roles in Love And Mercy and High Fidelity, is among the guests, along with Melissa Benoist from Supergirl; Edward James Olmos and Mary McDonnell from Battlestar Galactica; John Ratzenberger from Toy Story and Cheers; and D.B. Sweeney from the White Sox movie Eight Men Out.

New Order has a gig at The Chicago Theatre next Wednesday, March 16.