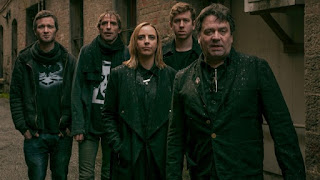 2015 saw the welcome return of The Chills, a New Zealand band that formed in the early 1980s but probably first came to the world’s attention with their 1990 masterpiece Submarine Bells. Vocalist-guitarist-keyboards player Martin Phillipps has been the driving force behind The Chills through all those years. On Silver Bullets, he combines his signature gorgeous arrangements with caustic lyrics about economic inequality and environmental disasters.

After opening with the light and nurturing “Warm Waveform,” Phillipps rails against oppression on the guitar-driven title track, warning, “If forced to fight your evil empire, we have the means to harm.” On “America Says Hello,” he singles out the United States for its aggression (“For on behalf of the war-god Mars, here are fifty white, fightin’-fit stars”) but suggests the country will redeem itself. The somber but exquisite “Underwater Wasteland” describes mysterious creatures at the ocean’s bed, and how humans are destroying them with toxic waste.

Tribal percussion and ominous keyboards set the tone for “Pyramid/When The Poor Can Reach The Moon,” an epic composition that laments the the futile efforts of the working class to appease the power-hungy leaders at the top. Little wonder then that on the deceptively catchy “Aurora Corona,” Phillipps implores the ancient goddess Gaia not to blow us away, and promises, “We can do better, today.” Silver Bullets ends on a redemptive note with “Molten Gold,” as Phillipps celebrates the power of love.
Posted by Terry Flamm at 10:24 PM